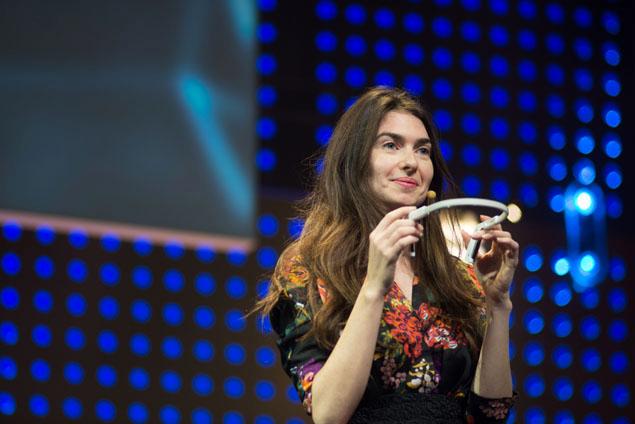 American tech blog VentureBeat has made a bold proclamation today, calling the Muse headband, developed by Toronto’s Interaxon, “the most important wearable of 2014”.

Writer Gregory Ferenstein argued that the  six-sensor headset that monitors brainwaves, is the king of wearables for its meditation and neurofeedback potential; its potential to measure “the quantified mind”; the potential to control things with your brain; and its comfort. He called it “first device that has the potential to bring brain enhancement to the masses. And that makes it the most important wearable innovation on the market this year.”

Interaxon is the Toronto startup that makes the Muse. It launched in 2007 and nearly doubled its funding goal on the crowdfunding site Indiegogo in 2012, earning just over $280,000. Its big payday came in August of last year when the BetaKit team was covering the GROW conference in Vancouver. There CEO Ariel Garten announced that the company had raised $6 million in funding from Horizons Ventures, OMERS Ventures, A-Grade Investments (the fund put together by Ashton Kutcher, Guy Oseary, and Ron Burkle), ff Venture Capital, Felicis Ventures, Bridge Builders Collaborative and Harbor Pacific Capital.

Back to the VentureBeat article, here’s why the writer feels its 2014’s wearable darling:

“The Muse launched with a neurofeedback application, Calm, where users see a progressively less cloudy beach sunset as they become more settled and attentive,” wrote Ferenstein.

“The Muse is on track to becoming the first device to seamlessly quantifying how food, sleep, and exercise impacts our mind,” wrote the blog. It found via testing that the Muse performed “moderately well” during a reaction-time test and the percent of time Ferenstein was “calm”.

We haven’t seen too much innovation in the way of brain control yet, but Ferenstein said Interaxon “imagines all types of brain-controlled interfaces, from in-flight entertainment to iPad games.”

Ferenstein wrote that the device is much more comfortable than anything that came before it, including rudimentary experiments using electrodes and alcohol swabbing.

“The near-finished prototype I got my hands on is a significant improvement over the competition. It’s a little clunky, and I have to wipe my head down each time to get a reliable connection. But I suspect these usability kinks will be worked out soon,” he wrote.

In the mobile world, innovation has become something that consumers expect, and the ability to, for instance, send photos and videos using cell phones…