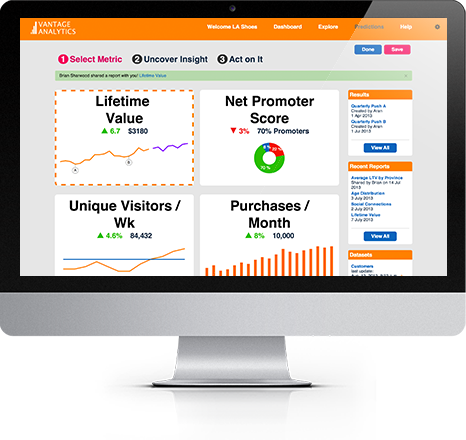 The past few months have been pretty nice for Toronto’s Vantage Analytics, and from the sounds of it the next few should be even better.

Last time we wrote about the startup it was still a wee baby, a project started by cofounders Aran Hamilton and Brandon Kane. (Hamilton is on-stage at the DX3 2014 conference in Toronto as you’re reading this).

It successfully beta-launched in October, just four months after the guys started working on it, and quietly made it’s free version fully available to Shopify merchants a month ago. Since then about 600 different online stores have been using Vantage Analytics, the first third-party app approved to be embedded directly into the Shopify merchant interface.

So, what does the platform do? By now it’s pretty easy for anyone to create an online store, but Vantage Analytics helps people actually grow that business, by being able to visualize the changes in their sales, spending and other metrics, and then make decisions based on those insights. Or more formally, the guys said it “solves the ecommerce pain point of growing a mid-sized online store.”

“We think that there’s a number of companies that have found it easy to collect that data, but they don’t have the tools right now to sift through it and actually leverage it to their advantage,” Hamilton told BetaKit in September. “So we offer a collection of powerful predictive analytics and data mining modules to allow them to visualize the data, collaborate and use it with their team and see patterns to really act upon it.”

The platform has now analyzed over 800,000 transactions worth over $65 million, identifying over 5000 consumers that are “highly active” online.

The Shopify partnership is pretty huge, as anyone with an online store with the provider most often will see Vantage Analytics its first choice for help in understanding their online store’s data. With all those stores using the free tool it seems like a good time to offer a premium, paid-tier version of the service, and that’s what Vantage Analytics is currently working on. It’s expected to be out sometime next month.

The company is also in the middle of raising a seed round but Hamilton wouldn’t say too much other than that.

The startup is riding along a new paradigm of understanding mass amounts of data only produced within the last five to ten years. The world’s data is projected to grow 50 times over the next decade, and dozens of startups in North America already have developed products to help people visualize it in order to understand it.

But Hamilton believes that people need to understand their data before they use tools to visualize it. “Data visualization is very valuable, but we don’t see the point in just visualizing the data if you don’t understand it,” he said. “On the front end, we make it really easy to get the data into the system and on the backend it’s really easy to act on the data or the insights you’ve made.”

Infiniti Lab has opened applications for its IoT and smart city-focused accelerator in Toronto. Launched last year, the accelerator runs a six-week program with…