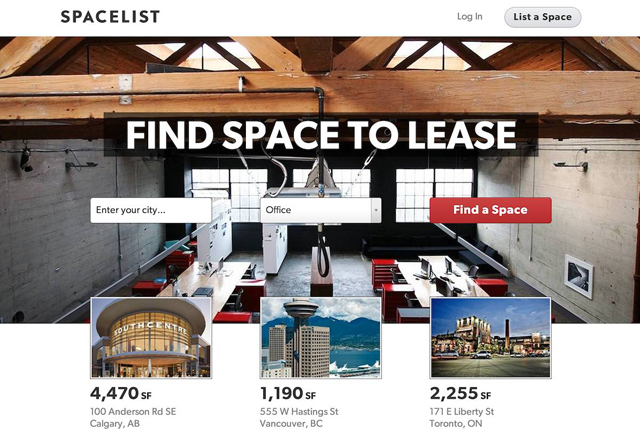 Vancouver startup SpaceList is claiming that it’s now the #1 marketplace in Canada for commercial real estate.

A company spokeperson said in an email that the company has “over 20,000 active listings representing over 300 million square feet of available space, significantly more than ICX or any other platform,” and that’s because SpaceList is completely free to use. “No other site allows you to see everything on the market without paying a fee.”

A recent feature in the Vancouver Sun detailed how on SpaceList, landlords from across Canada post their commercial assets (office, land, retail or industrial) at no charge for lease, and potential tenants can search for free through the listings, filtering by location, price, size, lease type and building class.

Founder Bill MacEwen entered into the Launch Academy coworking space and was eventually accepted into GrowLab’s Winter 2012 cohort. The idea for the startup came about after MacEwan had graduated UBC at the age of 25, and was trying to find a space for his then startup, WorkSpace. Later on working with a firm that owned a pair of buildings at Granville and Pender in Vancouver, he was tasked with leasing out space to companies. Unfortunately, he faced the exact same problem of accessing those who he knew were in the market.

As the Sun wrote, “they had about 2,000 listings at the end of last year, he said. Today, SpaceList and its nine staffers have the most complete and accurate commercial listings database in the country.”

“In 2013, we grew an average of 15 per cent a month on our visitor traffic,” MacEwan told the newspaper. “The project grew really fast.”

Review of 11 Canadian tech companies to watch in 2020

For the past few years, thanks to the team at BetaKit, I’ve had the opportunity to share my thoughts on some of the companies…