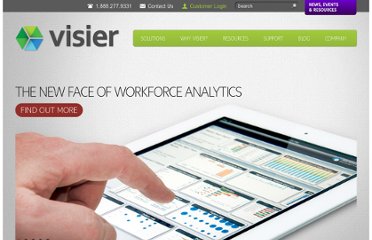 The cash is coming from Adams Street Partners as well as existing investors Summit Partners and Foundation Capital.

Visier’s main tool is its “Workforce Analytics,” which is a cloud solution, pre-built with HR industry expertise and best practices.

Implemented in four to eight weeks, the software for HR teams unifies workforce data from unlimited sources, providing answers to hundreds of workforce questions. From simple metrics, like head count, to complex predictive analytics, like which high value employees are likely to leave, Visier provides actionable insights on demand.

The new cash will be used to “expand into new verticals and consolidate its position in the human resources category,” according to CEO John Schwarz.

“The rationale for Visier was not being able to solve the [HR] problem for the business user,” said Schwarz. “Traditionally, executives have relied on programmers to take their queries about what’s happening inside different business units and abstract those queries into specific requests that could pull the data from inside corporate archives to find relevant information.”

“This is at least an $8 billion market. HR [software as a service] is one of the biggest spaces in SaaS today. … Our view is that it’s a very big market that’s going through a very big refresh cycle and there is a lot more opportunity for growth.”

Over the past year the company has released two new product offerings and doubled its customer count, according to a statement. The company also nearly doubled the size of its workforce, and opened a new headquarters in San Jose.

Customers include Nissan Automotive, government agencies in cities around the U.S. and energy companies like Exelon Corp., as well as McGraw Hill Financial, Time Inc., Baker Hughes, and NetApp, according to Schwarz.

“It’s not another one of these technologies that is going into the cloud and is optimizing query processing,” said Warren Weiss, a general partner with Foundation Capital and a member of the Visier board of directors. “You actually use English here. The company is trying to get end users to build analytical applications [using plain english] and this English gets converted into business metadata.”