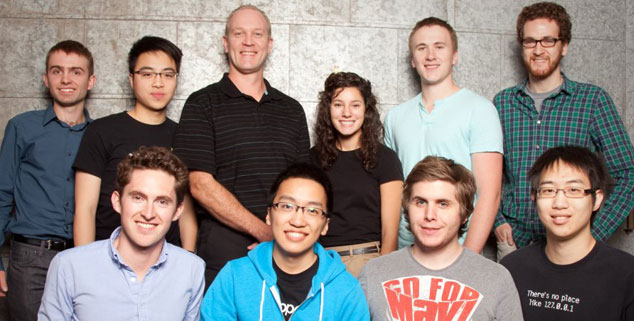 MappedIn, makers of an interactive indoor navigation system that offers mobile app or touchscreen kiosk for shoppers, launched from the University of Waterloo’s Velocity program earlier this week.

Now the startup has set up shop steps away from VeloCity, in Waterloo, similar to what VeloCity alum and Waterloo startup success stories Vidyard and Thalmic Labs did before.

“MappedIn has come a long way in the time they have been with Velocity,” said VeloCity director Mike Kirkup. “In just over three years with us they formed a company and grew to 13 employees with hundreds of thousands in investment funding and several big-name customers. They’re a great example for other startups to aspire to.”

Customer acquisition has been successful for the startup since its launch, having secured the business of more than a quarter of the major shopping malls in Canada and major Canadian retailers like SportChek, the Sheraton Hotel in Toronto, and Casino Rama.

“Maps and navigation are a central part of modern life. Just look at everyone’s reliance on Google Maps. We’re doing it for the indoors,” said CEO Hongwei Liu. “We’re building an indoor mapping platform that could service thousands of directories and millions of devices across different countries and continents. It’s going to be huge,” said CEO Hongwei Liu.

The cofounder pointed out many peoples’ reliance of Google Maps to get around outdoors. MappedIn is simply doing it for indoors, surely a less intense need but nevertheless still monetizable. “Maps and navigation are a central part of modern life,” he said.

Cofounders Liu, Mitchell Butler, and Leander Lee didn’t know one another when they moved in to the VeloCity Residence in summer 2010. But in the first week, Liu pitched a concept for indoor navigation and over the weekend Butler and Lee came up with a design and rudimentary web interface. They were already demoing the product within a week.

A year later they had their first customer and delivered their first kiosk in November 2011 – only three months after that initial demo on a basic touchscreen device.

That same month, Liu pitched MappedIn at the Velocity Fund Finals and won a $25,000 grant, allowing them to work on the company full-time from the Velocity workspace.

“We spent the next year just really figuring it out. Like most startups, we were pretty naïve about what would be involved. The complexity of what we’ve built today compared to what we thought we needed originally is mind boggling,” said Liu. “We’re grateful for the support Velocity gave us. They really understand how to coach startups.”

Even Non-Profits Are Accepting Bitcoin Now

We know that Bitcoin seems be accepted by more and more Canadian businesses, small or large, but now it appears that non-profits have joined…