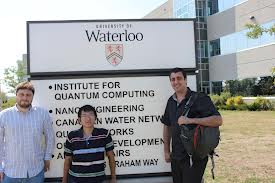 It’s no secret that a huge amount of high-potential startups are being churned out by the University of Waterloo, and today its Institute for Quantum Computing (IQC) announced the appointment of Steve MacLean, former president of the Canadian Space Agency, and Harvard professor Amir Yacoby as new members.

MacLean joins IQC as an associate member and Yacoby is appointed as the Lazaridis Chair in Physics.

“Waterloo stands amongst the world’s leaders in the revolutionary field of quantum science,” said Feridun Hamdullahpur, president and vice-chancellor of Waterloo. “IQC brings together internationally recognized researchers who are already developing our understanding of the quantum world. I’m delighted to welcome these two accomplished scientists to Waterloo to help push that understanding further forward.”

Steve MacLean is a laser physicist whose research has included electro-optics, laser-induced fluorescence of particles and crystals and multi-photon laser spectroscopy. MacLean’s work will include the development of attosecond lasers. The ICQ’s executive director Raymond Laflamme called the addition of MacLean and Yacoby “fantastic”. “Their experience and insight will complement our extraordinary community of researchers and continue the truly world-class research already happening here.”

As quantum research leads closer and closer to the very building blocks of nature, the quest to capture dynamic images at these scales becomes challenging. An attosecond laser, which would produce shorter and more powerful pulses of light, could allow for more precise images of the tiniest parts of our world. An attosecond is one quintillionth of a second and a laser with such short pulse lengths could help capture images as small as the space between atoms.

“I’m going back to my roots,” said MacLean. “I’ve always been a physicist at heart. A change is coming in how we build useful devices using the ideas of quantum mechanics. I’m excited to be a part of that here at IQC.”

Yacoby’s research at IQC will “tackle some of today’s biggest research challenges” including long distance coupling of quantum bits or qubits; the basic elements of quantum computers. “Most discoveries in science, including those that lead to societal impact, were never planned,” says Yacoby. “I’m looking forward to the hidden surprises and discoveries that will happen here at IQC.”

Yacoby earned his PhD from the Weizmann Institute of Science in Israel in 1994 and is currently a professor of condensed matter physics at Harvard University. He will spend three months each year as a visiting professor in Waterloo participating in research at IQC.

Not only does the university of Waterloo have the excellent IQC, but it also boasts strong degree programs in the science, technology, engineering and math (STEM) subjects, which is why so many technical startup founders in Canada seem to have Waterloo on their resumes. Particularly, the school has strong departments for applied cryptography, nanotechnology and mathematics as well.

“Rockstar intrapreneur” Paul Gaspar says there is no better time than right now for Canadian startups to start thinking global. As the Director of…