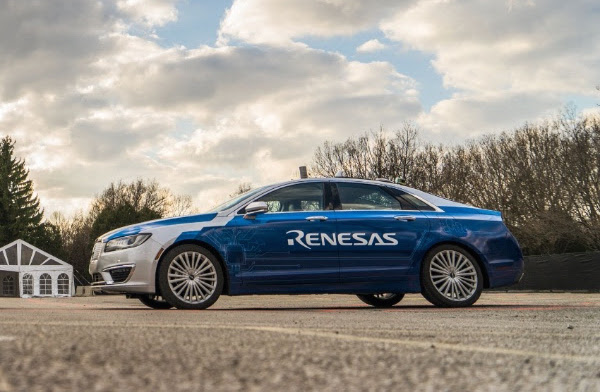 Twenty-five researchers from the Waterloo Centre for Automotive Research (WatCAR) contributed to the development of an autonomous vehicle that Renesas Electronics America unveiled at CES in Las Vegas.

The University of Waterloo-based team includes professors Sebastian Fischmeister and Steven Waslander, from Waterloo’s Faculty of Engineering; and Krzysztof Czarnecki, cross-appointed to Waterloo Engineering and the Cheriton School of Computer Science in the Waterloo’s Faculty of Mathematics. The researchers contributed a framework architecture of computer programs to enable the car to operate autonomously, as well as mechanisms to ensure safety in different driving scenarios.

Using sensors and computers, the car is capable of detecting and responding to other vehicles, stop signs, and traffic lights. One of its features include vehicle-to-infrastructure communications allowing the vehicle to detect in advance when a traffic light will change. The car uses the same Lincoln MKZ base model as Autonomoose, Waterloo’s automated car that received approval from the Government of Ontario in November as the first autonomous vehicle approved for testing on public roads in Canada.

Other partners that contributed to the car’s development include BlackBerry QNX. Acerta Systems Analytics, a UWaterloo spinoff, is providing performance and safety monitoring for the autonomous vehicle fleet.

“Working with Renesas, we’ve made great strides in developing a reference design for autonomous driving, and greatly accelerated our research agenda in all-weather autonomy and functional safety,” said Waslander, the autonomy lead on the project and professor in the Department of Mechanical and Mechatronics Engineering at Waterloo.

Waterloo researchers conducted testing of the car at a local test track and in a parking lot in Stratford, Ontario, modelled on the Las Vegas demonstration site with the added complexity of adverse weather conditions.

“We are pleased to have the University of Waterloo as a contributing partner to our new autonomous vehicle,” said Amrit Vivekanand, vice president of the Automotive Business Unit at Renesas Electronics America. “With Waterloo, we have established a deep working relationship, engaging with them beyond traditional academic levels of collaboration.”

The team is demonstrating the prototype on a closed course at CES.

The federal government’s fund-of-funds for startups has achieved its second close, bringing total commitments to date to $233.5 million. Announced back in January, the Northleaf…