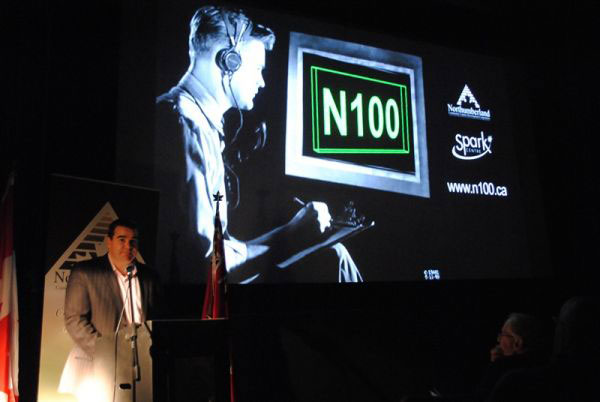 The Unified Computer Intelligence Corporation (UCIC) has won a $100,000 investment as part of winning the Northumberland CDFC N100 Startup Competition.

Never heard of it? That’s likely because this was the first one. Northumberland CDFC is a not-for-profit organization dedicated to providing financing and strategy for entrepreneurs through a $5 million fund. Meanwhile the N100 (the name of the competition) awards higher risk ventures like UCIC with early-stage seed capital.

UCIC won the five-month competition (which features startup challenges including a pitch contest) with its development of “Ubi” (the ubiquitous computer), a “revolutionary new device that will change how people interact with computers.”

“We would like to congratulate UCIC as the first winner of N100, and we thank the 34 participating startups who responded to our global call with creative drive and entrepreneurial passion,” said Wendy Curtis of the Northumberland Community Futures Development Corporation. “N100 was designed to help transform ideas into investment-ready opportunities, and we look forward to the continuing evolution and growth of UCIC as the team sets out to achieve its next milestones—including shipping beta versions of the Ubi this fall to backers of their successful Kickstarter campaign.”

Northumberland County is situated on the north shore of Lake Ontario, in central Ontario. It is located east of the Regional Municipality of Durham, but before Belleville and Kingston.

The N100 competition was presented in partnership with Spark Centre and the N100 Power Panel. Spark Centre is the place where entrepreneurs, innovators, investors, researchers and students come together to form an innovation ecosystem, created by the Durham Strategic Energy Alliance. Spark Centre is one of fourteen not-for-profit Regional Innovation Centres (RICs) that form part of the Ontario Network of Entrepeneurs (ONE). Meanwhile the N100 Power Panel included representatives from the MaRS Investment Accelerator Fund, Maple Leaf Angels and National Research Council of Canada-IRAP, along with RBC 2012 Canadian Women Entrepreneur of the Year, Jodie Glover and serial digital entrepreneur, Paul Godin.

Now that all the unnecessarily long acronyms are out of the way, lets talk about UCIC, the startup that now possesses a cheque for $100,000. The team is made up of CEO Leor Grebler, Amin Abdossalami and Mahyar Fotoohi. Its first product, the Ubi, is a “revolutionary” new ubiquitous, voice-activated computing device that offers instant access to information and control of home automation devices. Equipped with a microphone, speakers and onboard sensors, it plugs into a wall outlet and accesses the Internet through a wifi connection. The Ubi listens for commands and monitors the environment, including temperature, humidity, air pressure, and ambient light. This data can be accessed online or used to trigger alerts through email or text message.

Grebler said that the team was “thrilled” with the outcome of the competition. “We are witnessing the dawn of the era of ubiquitous computing and the internet of things,” he said. “UCIC and its partners are at the forefront with Ubi. We look forward to working closely with Northumberland CFDC to establish a centre of operations, create jobs and grow our presence and impact in Northumberland.”

There are more long acronyms below: take a deep breath.

N100 is part of Northumberland CFDC’s startup acceleration toolkit, which also includes FedDev Ontario’s Scientists and Engineers in Business (SEB) Initiative in Northumberland. SEB provides up to $30,000 in matching seed financing for startups led by STEM Entrepreneurs. Some of the portfolio companies include: IFTech (immersive technologies/ARAIG), TheyINNOVATE (consumer technology products/Clipless), KAI Innovations (health informatics) and Gift-IT (a new online classified site where revenue goes to charity). In total, the initiative supported the launch of 20 startups over the past year, “making rural Northumberland an emerging startup hotspot.”

Startups in the Northumberland County area may like to know that N100 is set to enter its second year with a new global call for applications in January, 2014.