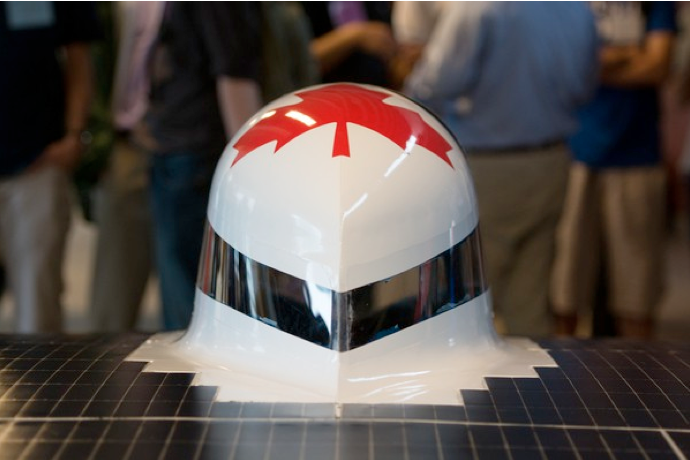 The B-7 is all charged up and ready to go. For the past 18 months, the University of Toronto team have spent countless hours working on the B-7, their latest solar powered racing car. The team unveiled the B-7 a few weeks ago and are now looking to crowdfunding site Indiegogo to help them raise funds to race it at the World Solar Challenge.

The Indiegogo campaign, which started last week, has a goal to raise $15,000 by the end of August. The funds will go towards race logistics – primarily the shipping of the car to Australia where the World Solar Challenge is being held. Campaign backers have some pretty interesting perks including an invite to a solar car workshop, cut-offs of solar cells from the creation of the car and a 3-D printed model of the B-7.

Chief Advancement Officer, Tiffany Hu, informed BetaKit that they chose Indiegogo to help raise the profile of the B-7, plus raise additional funds that are not covered by sponsors.

This is the fourth time that the University of Toronto solar team will be racing at the World Solar Challenge. Although this year’s team has many new faces, U of T has been building solar cars since 1997 and has built six in total. The team continues to benefit from the mentorship of past members who show support from design reviews and quality assurance. Among the alumni are the creators of the NanoLight – the world’s most energy efficient light bulb that successfully raised over $270,000 (over 10 times their campaign goal) on Kickstarter back in March of this year.

Blue Sky hopes to place within the top five this year and feels the construction and reliability of the B-7 will take them there. Ranking within the top five would be a personal best for the University of Toronto team. The last time they raced in 2011 the team ranked 24th, but the previous two races they placed 11th (2007), and 12th (2001).

Inaugurated in 1987, the World Solar Challenge will see over 47 teams from over 20 countries compete in the Australian endurance race of 3,000 kilometers. Representing Canada, alongside the University of Toronto, are also teams from ETS of Montreal and University of Calgary.

“This year, the World Solar Challenge is pushing cars to be much more practical than the cars that were asked to be built ten years ago,” explained Hu. “In the past drivers were basically lying down flat on their back with no steering wheel and a tiller system. Even though the cars now still look different than the cars you see on the road they are much more alike from the perspective of driver control. The B-7 has a driver pod, steering wheel and allows the driver to sit upright”.

According to Hu, the World Solar Challenge has also introduced a new class of racing vehicles, the Cruiser Class, which encourages the car to look more like everyday cars. The regulations for these vehicles are much more complicated and require the car to be designed with trunk space and seating for more than one passenger. The Blue Sky team hopes to compete with a Cruiser Class vehicle in the next World Solar Challenge.

Racing a solar car is much different than the Formula 1. A big part of the competition is about the vehicle efficiency and energy management. The challenge is that these solar cars only get about one kilowatt of power from the solar array. This is about the same amount of power it takes to run your toaster at home. Yet the cars need enough power to run at a top speed over 100 km/h. To get around issue is similar to a math problem: power into the car is constant but the power out needs to be reduced as much as possible. The B-7 team had to factor in the efficiency of the design and the weight of the car. The B-7 features the latest advancements in photovoltaic technologies, a brand new aerodynamic design and improved vehicle dynamic systems, weighing about 20% less than its predecessor due to its carbon-fiber fabrication.

The challenges in designing and developing a solar powered racing car were summed up nicely in a speech made by Blue Sky’s Managing Director Paul Park: “No idea is too crazy or too out of this world and that is what this project is really all about – tackling a seemingly impossible task and coming up with a solution. With that frame of mind you can accomplish anything.”