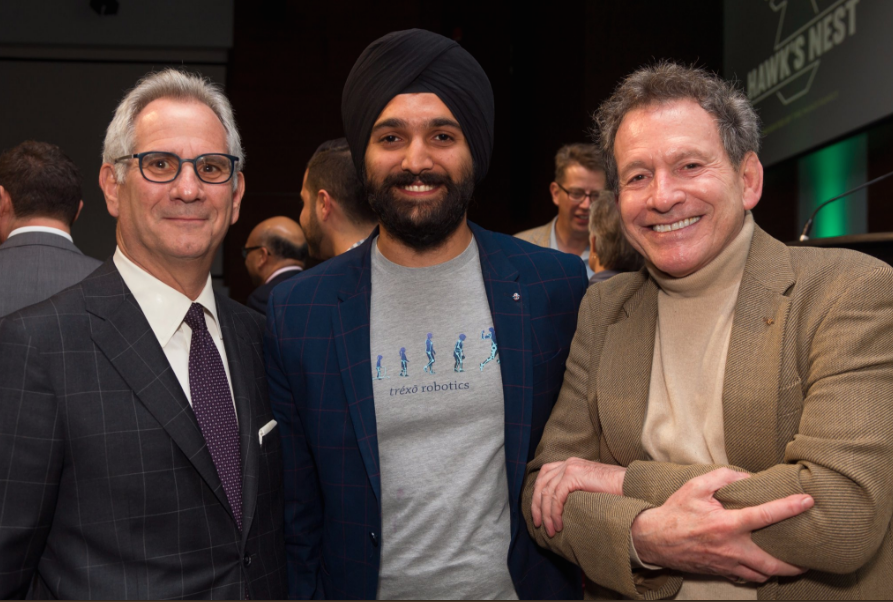 Last week, Sunnybrook Hospital Next Generation hosted the Hawk’s Nest, a healthtech-focused competition challenging four startups to pitch before the ‘Hawks,’ a panel of VCs and health industry leaders.

“You start with a small market and you monopolize that.”
– Manmeet Maggu, founder of Trexo Robotics

“I’ve attended and spoken at a lot of startup pitch events at MaRS, but I’ve never seen the space look so good,” said Soltys.

As the Next Generation’s mandate is to engage a new generation of Sunnybrook supporters, it’s fitting that the event explored the intersection between innovation and health.

The packed room listened in on pitches from RetiSpec’s Eliav Shaked, whose company is developing a non-invasive retinal scanner that detects Alzheimer’s pathology years before the onset of symptoms; Trexo Robotics Manmeet Maggu, whose team is building an exoskeleton device designed specifically for children with disabilities; Vivavax’s Julia Peng, the founder of a company creating biosafe formulations that protect sensitive medications from breaking down during transport and storage; and Acorn Biolabs’ Drew Taylor, which is developing a mail-in non-invasive cell collection kit to cryopreserve and sequence people’s cells to prepare them for future therapeutics.

The winning company was set to walk away with a non-dilutive cheque for 50 percent of the event’s proceeds, up to $50,000. In the end, it was Trexo Robotics that walked away with the top prize; the event raised a total of $100,000, so they took home around $35,000 while Sunnybrook received the rest.

So happy to have been part of such a great event @kshah2775 . The winning company was Trexo Robotics, a company that is building the first exoskeleton device designed specifically for children with disabilities. @SBNextGen pic.twitter.com/GL1u3VCJR6

“While it was the smallest apparent market opportunity, in the small number of billions as opposed to tens of billions, they were not facing any apparent competition in going after that market,” said Palter on why the company won. “They had a working product that they had actually in market, and a very good chance of actually having sales because of a dedicated channel. They had clinics that had an interest in moving their product and helping their patients.”

Maggu said that this smaller market approach was by design. As a company that’s operating as a robotics, medical device, and impact company, it’s a challenge, but Maggu says they manage that by finding the right team to help them stay targeted.

“You start with a small market and you monopolize that. And by being in the children’s market, we’re the only solution out there,” said Maggu. “In a case like that, as a startup, that’s the ideal customer.”