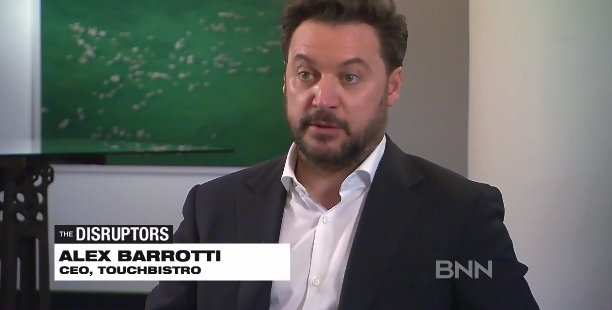 When a large group of people go out for dinner after work, it can be a tedious and time-consuming process for waiters to manually take down each person’s order. To help restaurateurs save time on taking orders and provide better customer service, Toronto-based TouchBistro has developed an innovative order-taking platform that lets restaurant servers take orders using a tablet instead of the traditional pen and paper.

TouchBistro founder and CEO Alex Barrotti sat down with The Disruptors co-host Bruce Croxon to discuss how the company is transforming the restaurant business. TouchBistro’s system allows restaurant servers to download an app that lets them take customers’ orders on a tablet, send it directly to the kitchen, and then provide an automatically generated bill.

“What’s happening is that there’s a renaissance going on, which has been inspired by tablets. We find that our restaurants really embrace this technology as we have a custom case that makes everything easy for them,” said Barrotti. “It’s great because we’re a Toronto-based company and we have over 12,000 terminals in all these various countries.”

While TouchbBistro has over 700 restaurants using its system just in Toronto, it also serves restaurants and bars in over 37 other countries. In August, the company announced its partnership with Square, which makes it easier for TouchBistro’s users to process bills.

In the interview, Croxon said new startups looking to expand outside of Canada can learn from TouchBistro as it has established itself in Toronto, but serves many users outside of the country.

“I get so excited because the company has processed $4 billion worth of food,” said Croxon. “When I get a chance to talk with Canadian companies that have the choice and have decided that we have the engineers, we have the customer service, we’ve got everything you need to run a world-class company here, I just get so fired up.”

ArchAngel, a new network of investors in Kitchener-Waterloo, has launched an angel-stage fund to support Canada’s “high potential entrepreneurs and proven innovators.” The ArchAngel…