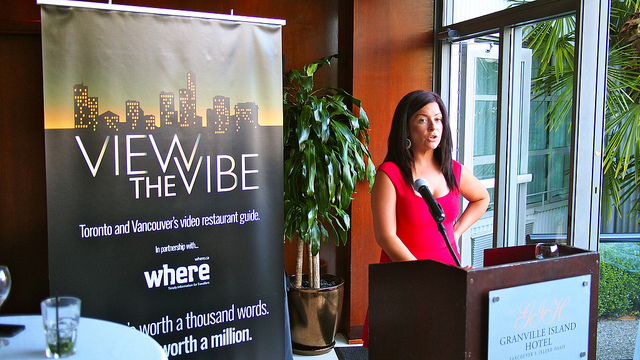 For about three years now, Toronto-based View the Vibe has provided its users with a “Video Restaurant Guide,” primarily serving Torontonians. Today the company announced that it would start featuring Vancouver restaurants and Toronto spas as well.

The site’s videos offer diners a “fly-on-the-wall vantage point” of the ins and outs of a restaurant’s food, ambiance, decor, clientele and service style.

Montreal-born founder Nicki Laborie founded the company as a result of frustrations looking for quality snapshots of various restaurants she wanted to visit. “Mired in too much choice, not enough tailored results, Nicki directed View the Vibe’s search capabilities based on a diner’s particular mood or desired ambiance,” the company told BetaKit. “In other words, what ‘vibe’ a diner is looking for in order to find a restaurant that satisfies their mood that day.”

It’s a pretty cool site aimed at more upscale diners, i.e. those with disposable income for nice dinners every night. But clearly it can also appeal to anyone  looking to splurge on a night out on the town, and being informed prior to spending big on a meal can never hurt. The videos are all 90 seconds in length and they allow viewers to “go inside the restaurants without actually going inside.”

To give a glimpse, here’s a review of Toronto’s Kalendar restaurant:

In a release, the company told us that the founder was born to a “worldly family”, who went “summering in France, dining on foie gras and steak tartare – much different than the macaroni n’ cheese dinners of her school friends.”

The videos are professionally produced and the company clearly invested in the production quality. Monetization likely comes from ad revenue or unique deals with individual restaurants.

It’s not just videos though: the site has an impressive list of options for future diners, including written reviews, news and buzz, and a “tastemakers” section, which profiles various hospitality names in Toronto and Vancouver. So if you’re looking for that perfect meal tonight for a specific vibe, View the Vibe can satisfy that hunger.

You know you want to watch various films at the Toronto International Film Festival (TIFF) this year, but aren’t sure movies are going to…