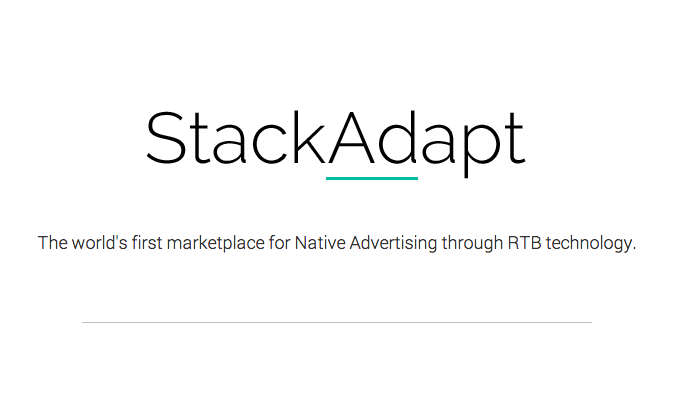 CollectiveRoll, a Toronto based online ad buying platform, is making a big bet on native advertising.

They want publishers (like blogs and other content-rich websites) to bring in the revenue they deserve, and they want advertisers to be able to attract users through non-disruptive advertisements.

It’s an ambitious undertaking in which the startup’s newest technology product that will enable this, called “StackAdapt“, is currently in private beta. Cofounders Vitaly Pecherskiy, Ildar Shar and Yang Han expect a full release in March.

The current model for advertising  that’s “pushed down a publishers throat,” as Pecherskiy said, just isn’t working, especially with more and more people surfing the web on their smartphones. No website wants to run 20 different ads on their page just to earn a bit of money because, well,  “it makes the website look like crap.” But the reality is that they’re forced to do this because there’s no other solution for them to monetize content, barring any other formal sponsorship agreements.

“We think it’s not the right way to go about it and we’re trying to solve that challenge,” said Pecherskiy, 26. “From a business standpoint we’re not inventing the wheel but from a technology standpoint we are.”

StackAdapt, the technology they’re almost ready to release to the public, is set to be the world’s first marketplace for Native Advertising through RTB (real-time bidding) technology.

For those readers not quite familiar with much of the stuff I just wrote, here’s a short history told to me by Pecherskiy. Programmers started implementing ads on the Internet by doing the most logical thing: they mimicked the ads we all see on billboards and in newspapers, by displaying them in a “banner” style (basically a rectangle). But since then, even with the advent of mobile, not much has changed. Sure, there’s advanced targeting capabilities like cookie targeting and geo targeting but the ad units are mostly the same.

“Few people realized how big it would become and hence little thought was initially put into how technology can be used to completely revamp the advertising ecosystem. So when mobile advertising came about — the easiest solution was to copy the desktop model but just shrink the size of ads,” said Pecherskiy.

Along with mobile ads, a few headaches have come along for both publishers and advertisers (which is what StackAdapt is trying to relieve).

Namely, its harder for advertisers to target users across devices, while publishers aren’t making nearly as much money. Pecherskiy offered that CPM (the cost per 1000 views on the website) for desktop web ads is about $3.50, while the CPM for mobile ads is just $0.75, and advertisers just aren’t ready to pay desktop prices for tiny ad units. The cofounder figures that with the loss of revenue, as a typical blog loses more and more viewers from the web to mobile, comes a reliance on more ads. And more ads generally “disrupts” the content, or in layman’s terms, it looks like crap.

“Right now publishers are stuck with banner ads because they don’t have the capacity to sell off custom premium-priced ad units at scale, so they’re forced to use banner ads to generate revenue,” explained Pecherskiy. “and the ad networks they work with only have the technological capacity to support banner ads.”

CollectiveRoll’s solution is StackAdapt, the technology that enables scalable native ads (the kind that look more like actual content and not soulless ads in the corner of a screen. These ads tend to “blend in,” disrupting the viewing experience less). For publishers it means they can charge reasonable rates for the ads they display, without jeopardizing user experience. For advertisers, it gives them an opportunity for native content promotion at scale. “For users – it’s just a great experience on the web or mobile,” said Pecherskiy.

If any publisher is interested in joining StackAdapt’s private beta, the cofounders encourage them to do so. As for the future of advertisement and content online, it’s safe to say that with sites like this we’re inching towards the day where publishers producing rich content for their readers can start earning more than pennies- and ads won’t be so disruptive.