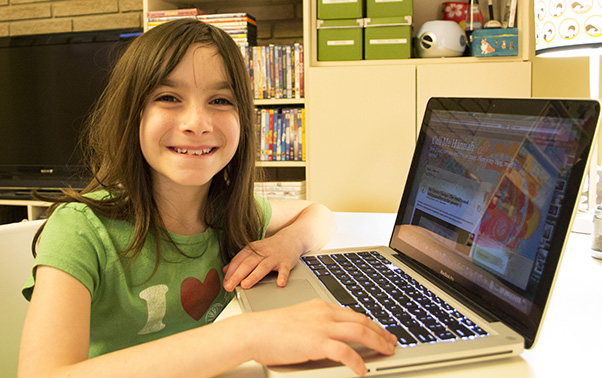 Hannah Alper had probably just finished school on Wednesday when I spoke to the ten-year-old eco-blogger as she approached Pearson airport with her family. She was headed to Vancouver to speak in today’s We Day, the annual “youth empowerment” event organized by the Free the Children charity, held in cities across Canada and the United States.

Already Alper has been called “the future of social media” and “eco-warrior”. Now she can add “We Day speaker” to the list. The well-spoken young girl said she was “humbled to be chosen” and excited to feel the energy of the building, when she takes the stage today.

Her journey to blogging notoriety started last year when she went to a Digital Families Summit in Philadelphia with her family, attended a three-hour WordPress seminar on her own and had started a blog by the end of it. CallMeHannah.ca was created with the goal of sharing her growing knowledge and concern for the environment. Topics she’s written about over the past year include eco-friendly living, fair trade, bullying, clean water and child labour.

According to her father Eric Alper, a Toronto-based media worker, she seeks inspiration and motivation from those who have come before her and regularly features the stories of her role models on her blog. “One of the things we told her is we didn’t want to it to be about pop culture or music, but she was always interested in animals, so she made the connection between animals and the environment,” said Alper. “She started writing about how people could help out the environment. She realized that the environment was everything and that it affects so many different areas.”

At today’s We Day, Hannah won’t be speaking about herself, or her blog, but rather she’ll tell the story of Malala Yousafzai. Yousafzai is the well-documented 16-year-old from Pakistan who’s life was nearly taken away from the Taliban after she had been blogging for the BBC about her struggles as a young female trying to go to school. “I’m speaking about my message that young people can change the world and that we’re never too young,” said the ten-year-old.

At different times the Taliban banned girls from attending school, and at the age of 11 in early 2009, Yousafzai began blogging under a pseudonym about life under Taliban rule, their attempts to take control of the valley, and her views on promoting education for girls. Since recovering from a gunshot wound to the head in a London hospital, Yousafzai has met with Queen Elizabeth, spoke at Harvard University, received several awards and even confronted US president Barack Obama on his country’s use of drone strikes in Pakistan.

When she gets older Hannah wants to be an activist of some sort, and she’s well on her way with the blog. “It gives me an opportunity to really express my feelings, a way to share my passion and get people to commit to the environment, child labour or poverty,” she told BetaKit.

She organized a shoreline cleanup in her community, she was the youngest WWF  Earth Hour Team Captain in 2013 (and spoke at the WWFs Earth Hour event in Toronto), and was the official “on the ground eco-blogger” for the JUNO Awards. She also launched “We Create Change“, a canned food drive initiative linked to Free the Children. Moreover, her impassioned speech at two local schools motivated her peers to collect 97,500 pennies for Free The Children’s clean water projects. She’s even appeared on CanadaAM, The Marilyn Dennis Show, APP Central, CBC’s Fresh Air and The George Stroumboulopoulos Show.

Yesterday Hannah continued “We Create Change” with her school in Toronto, starting a canned food drive. While she was the first in her class to start actively promoting good causes, she said its rubbed off on a few fellow students now interested in following suit.

I told her that when I was her age, the only thing on my mind was probably getting back to Nintendo64 after I had finished my homework. Hannah assured me that despite her activism, she’s still like any other 10-year-old.

Toronto-based Payment Source is partnering with the Canada Revenue Agency, allowing Canadians to make tax payments at 6,000 Canada Post locations across the country….