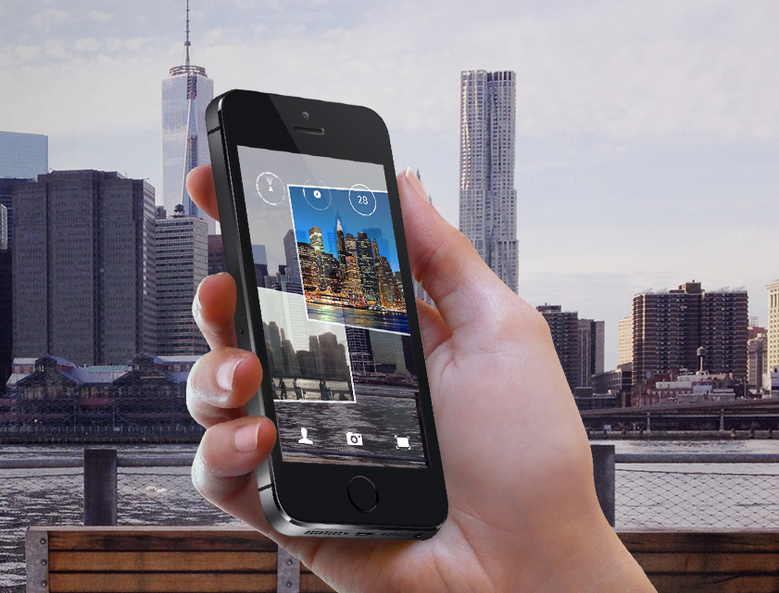 The Flux app gives you superpowers: imagine looking at a bridge with graffiti painted over. Now someone can whip out a phone and look at that place with Flux to see the graffiti as it existed before the layers of paint; how graffiti art has changed over time; and how a new condo was built next to that bridge.

The app documents the history and evolution of a location. Creating a new visual depository of collective memory is no small feat to take on.

Flux is built on top of a technology that allows users to precisely situate photos in the locations where they were captured. These photos can be navigated in space by visiting a location where a photo “lives,” and navigated through time by playing with layered photos like a flip book. The technology was derived from military airborne Wide Area Persistent Surveillance systems, which quickly and accurately fuses large imagery data sets from multiple sources into composite images of large geographic areas.

“We did early exploratory work and grabbed an archive of graffiti photos; redeveloped and painted over. We needed to map the photos spatially and come up with prototypes of what it might be like to use a phone and scroll through the archive of a place, when you’re there,” Matt Nish-Lapidus, design director at Normative told BetaKit. “UI had to not obscure the vision. Everything had to be about the photos and the immersive kind of experience.”

As a result of designing the app, Nish-Lapidus said the Normative team learned a ton from tackling its complex technological, UX and design challenges.

“The photos aren’t curated – everyone adds what they like, what they think is interesting about a particular place. With Flux, you can literally watch the gardens grow and buildings go up. The app is a photo taker and viewer. Every photo can be annotated. Users can take several photos at a time, upload it all to Flux, follow other people, and filter. For example, if you’re interested in street art, you can see the map of all the graffiti in your city.”

SMLR, a Washington-based startup behind Flux tapped Normative to solve the technological and design challenges to create a product that would fuse geospatial technologies and user-generated imagery data. The result is an impressive new layer of cultural geography, a new kind of memory made possible by people taking photographs of places all over the world.

What’s next for Flux? User base growth and creative partnerships. Just imagine what this app could potentially do with photos from Toronto city archives superimposed onto user-generated images of the city as it is today – and that’s just one of many possibilities.

Flux is your time machine. Get in.