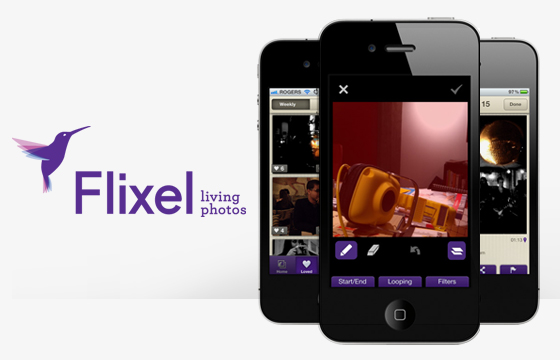 Toronto-based Flixel launched in early 2012 as part of an initial wave of video-centric mobile social networks. Battling with incumbent Cinemagram, Flixel offered a slick interface and powerful tools that allowed users to capture four seconds of video and animate parts of the content, editing the video with loops, filters and other effects. Though it found some success, Flixel never managed to emerge out of the Cinemagram’s shadow, and the company decided to slow down for a few months to figure out its pivot.

The company has now relaunched, bringing a brand new simplified interface, and more of a focus on brand partnerships and professional capture. The old magic is still there, and now that video is back in the forefront of users’ minds with the popularity of Vine and Instagram, there is potential for much greater success.

Flixel 2.0 is launching with both free and paid tiers, the latter a $9.99 upfront price meant for videographers who need more granular editing tools and higher-quality video. The new version is also iPad-compatible, something that should stand the company in good stead as it focuses more on creation.

To that end, Flixel is no longer limited to video captured on the iPhone. Users of the Pro version can import content from cameras using the iPad’s adapter and, once edited, they have to option to export in full HD quality (with an in-app purchase of $19.99).

The beauty of a cinemagraph is its simplicity: capturing a short video clip often leads to portions of it being sublimated into the whole. With Flixel, users can choose what they want to highlight, be it hair blowing in the wind or a waterfall at a nearby lake. This new app offers much higher-quality video capture, even in the free version, and emphasizes stability over quick-and-dirty clips. Though the first version offered a stability indicator, Flixel now encourages you to place your iPhone on a surface in widescreen mode; this is less spur of the moment, more pre-planned vitality.

Flixel promises an expedited update process this time, and has the momentum to go mainstream. We hope it does.

ContactMonkey announced this week that they’ve secured an $800,000 round of seed funding from Plazacorp Ventures and several angel investors. The Toronto-based company helps…