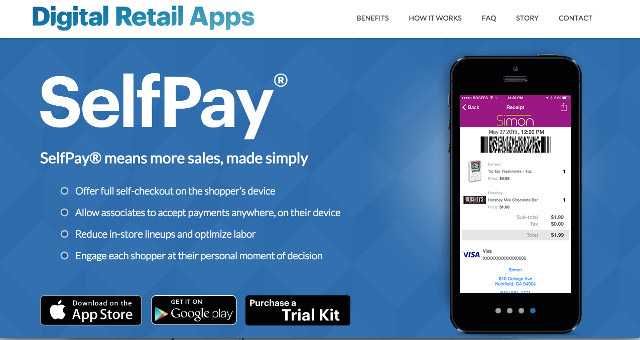 Digital Retail Apps, a Toronto-based startup focused on mobile shopping and payments, announced that it has raised $1 million in funding, led by Texas Ventures and U.S. angel investors. The company has to date been self-funded by founder capital, friends, and family investors since its launch in 2012.

“We’ve researched many players in the mobile payments space and believe Digital Retail Apps is the leader in this category. Digital Retail Apps’ value is further enhanced by the strength of their IP portfolio including their issued and pending patents, in the United States and other countries, which will help make in-app payments very attractive to brick and mortar merchants,” said Scott Crist, CEO, Texas Ventures.

Digital Retail Apps flagship product is SelfPay, a fully mobile self-checkout solution for in-store shopping that lets shoppers use their smartphone to scan items for payment, build their own shopping card and pay in-app, using a variety of supported payment methods, such as credit and debit cards, Apple Pay, or PayPal. Since launch, SelfPay has been able to increase shopper basket size up to 17 per cent, while reducing retail labor cost by more than 30 per cent.

“We are seeing more and more retailers shift their focus to an app-based payments model, which eliminates the checkout line, as opposed to a tap and pay model,” said Wendy MacKinnon Keith, CEO and founder, Digital Retail Apps. “We provide the natural evolution of the existing POS and payments ecosystem by extending it to consumers’ mobile devices, making shopping and paying effortless.”

Digital Retail Apps is currently in early discussions with several large retailers in the U.S, Europe, and Canada, and is fully-integrated with Beanstream, LightSpeed, Shopify, and Vend POS software.

When David Gens started Merchant Advance Capital in 2010, his first customer was a small Calgary-based retailer. The owner was a former roommate who…