Over 800 SaaS professionals and investors converged on the Shaw Centre in Ottawa to network and strengthen relationships within Canada’s burgeoning software industry, which saw $6.9 billion in revenue in 2015.

CEOs from Canada’s top SaaS companies including FreshBooks and Shopify took the presenter stage, along with a host of international executives from companies like Microsoft and Hubspot. BetaKit was there keeping tabs on the most important takeaways to share.

Here are the 10 smartest things we heard at this year’s SaaS North conference:

The importance of community

Leo Lax, executive managing director of L-SPARK and founder of SaaS North, kicked off the conference with an impassioned talk about the intention and origin of the conference.

He explained the event was meant to connect and teach the next generation of entrepreneurs who are building and growing SaaS companies not only in Ottawa, but all around Canada. He stressed the value of inclusion and idea-sharing, urging the audience to connect and learn from each other.

Machine learning is going to eat the world

Chris Makkreel, director of sales engineering at Salesforce, spoke about the growing pervasiveness of AI startups in the tech space. VC investments in private AI companies across the world reached an all-time high in the second quarter of 2016, with over a billion dollars in deals made.

AI products are being developed for verticals ranging from healthcare to food to finance, and with continual advances in machine learning technology, this upward trend is poised to continue.

Future of #AI @salesforce through their new platform Einstein – excited for the possibilities for data driven actions #SAASNORTH pic.twitter.com/9QW5cLtiB1

Big data is the new currency

SurveyMonkey CEO Zander Lurie discussed that companies are optimizing big data for predictive analysis and other applications to improve the user experience.

Hustle harder to beat the competition

Bruce Croxon, managing partner of Round13 Capital, discussed his entrepreneurial journey from co-founding to Lavalife to his successful exit.

One piece of advice that’s extremely relevant in today’s crowded startup landscape: if you’re not working on the weekends to build your business, your competitor is working on building theirs.

The rapid growth of SaaS

Mike McDerment, FreshBooks CEO and co-founder, discussed the major project of rewriting the FreshBooks tool from scratch. While it was an arduous project that needed some iterations, it was ultimately necessary because the software had been built in 2003, prior to today’s common SaaS frameworks like Ruby on Rails.

In relaying the story to the audience it became evident how many more SaaS tools are available to develop SaaS web and mobile applications.

"The next thing for our business is making the product even simpler to use" @MikeMcDerment on the decision to rewrite @freshbooks #saasnorth pic.twitter.com/mn0CMBTesy

Sir Terry Matthews, serial entrepreneur and chairman of Wesley Clover International, described how not acting quickly or at the right moment can be fatalistic for businesses.

In discussing the SaaS space, Matthews noted that now is the perfect opportunity for new players to emerge and thrive. Compared to 10 or 20 years ago, SaaS wasn’t a common topic. Today, he stated, it’s growing at a ferocious rate.

Everything you have seen so far is nothing! Timing is everything and everything is changing. ~ Sir Terry Matthews ~ #SAASNORTH pic.twitter.com/ytkuUivceb

OMERS Ventures’ John Ruffolo stated that Canadian companies need to stay put in Canada in order to employ people, and pay taxes. Ruffolo presented a visualization of early stage to later VC rounds and adds that each year, he’s had to raise the amount of capital at each one.

Tobi Lütke reveals that when receiving advice, he carefully considers who’s giving it before deciding whether or not to listen to it.

Lütke also emphasized how important it is to be able to delegate and be surrounded by a team that can execute when you’re at the critical point of scaling and growing.

Vision Critical CEO Scott Miller discussed how in being authentic, brands can capture customers and retain a loyal client base.

Millennials, in particular, can detect phoniness in messaging and branding, and there’s really no more room for inauthenticity in today’s marketplace.

"Don't spam your customers!" Biggest lesson for people to learn from @MillerUnplugged #SAASNORTH

Amplify your message to the media

Publicize founder and CEO Conrad Egusa provided PR tips for SaaS marketers, emphasizing that amplifying your message to the media is critical when trying to get coverage.

When speaking to media, it’s best to not concentrate on where your startup is at this moment; rather, it’s important to emphasize where it will be in three to five years, when you have millions in revenue and you’re changing the world.

Pro tip: you know when you’re about to go to bed or you’re at the gym daydreaming about your company? That’s the vision you want to share with a journalist. 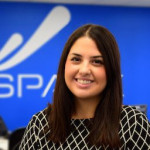 Lucy Screnci has written about tech, business and startups for the Ottawa Business Journal, Techopia and Techvibes.com. She is currently the editor for Voice of the North and is Digital Content Manager at L-SPARK, Canada's SaaS Accelerator.