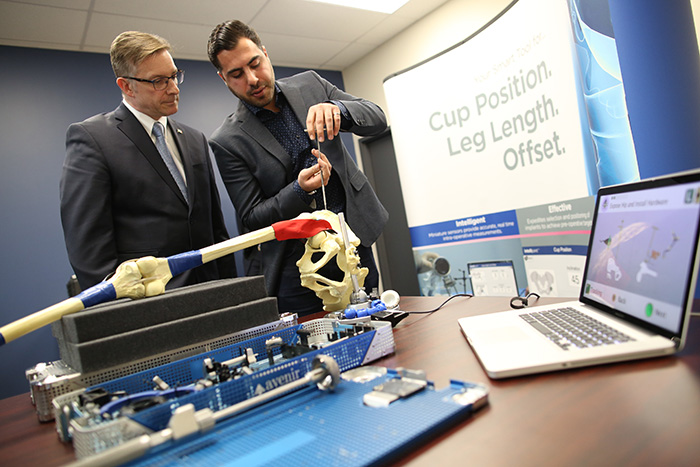 This week, several Canadian startups have made announcements, launching new features, getting industry approvals, and more. Here’s the latest on Canada’s movers and shakers.

Intellijoint Surgical will showcase the full Intellijoint HIP suite at the AAOS 2017 Annual Meeting from March 15 to 18 in San Diego, California. In November 2016, the company raised a $11 million Series A from private investors in the Waterloo-Toronto corridor.

The awards ceremony was held on March 7 at LendIt, a conference dedicated to providing FinTechs and lending platforms with networking and business development opportunities. Flexiti Financial said it was selected from among five finalists by a panel of more than 30 experts and influencers, who recognized its POS solution as having the greatest potential to impact the future of consumer lending.

“Tonight, we couldn’t be more thankful to the organizers and judges for recognizing Flexiti Financial with this award,” said Peter Kalen, the founder and CEO of Flexiti Financial. “I speak for the entire Flexiti Financial team when I say that we are overwhelmed by the recognition and confident about our future as the leading POS lending platform for retailers across North America.”

The announcement comes just a month after Flexiti Financial announced that it secured access to over 1,000 new retail locations. In November 2016, Flexiti Financial raised a $5 million Series A from investors like Globalive Capital.

Kitchener-based Dozr, an online heavy equipment marketplace, announced that it is now guaranteeing equipment buyers rental revenue on any machinery purchased on its platform to reduce risks involved in purchasing machinery.

Dozr said the new offering is a response to rising construction equipment costs and contractor demand for more flexible fleet management solutions. Users buying equipment through Dozr will get up to five years of off-season rental revenue, which the company says can cover a significant portion of the initial cost of equipment. Depending on the machine bought, equipment owners can earn 40 to 90 percent of their annual payments back in rental fees by renting out equipment for just a few months.

“Guaranteeing rental revenue during the off-season greatly decreases the risk of making such a big purchase and has benefits for owners, manufacturers and renters,” said Kevin Forestell, CEO and co-founder of Dozr. “By connecting with customers online, sellers and OEMs can increase their profit per machine, and buyers get transparent and competitive pricing. For renters, our new direct sales program means more equipment will be listed for rent at lower rates.”

Dozr expanded to the United States following a $2.5 million funding round led by FairVentures in September 2016; its first expansion was in New Jersey and its most recent was in Florida.

The company, which raised a $21.5 million Series C in January, made its first sale to Dr. Gregory Czarnota, Sunnybrook Health Sciences Centre, and Sunnybrook Research Institute in Toronto. Exact Imaging’s platform allows urologists to visualize areas of interest in the prostate and specifically target biopsies at those areas in addition to performing systematic biopsy protocols.

“We are very pleased to received our license and regulatory approval from Health Canada allowing our ExactVu micro-ultrasound system to be commercially available in Canada,” says Randy AuCoin, Exact Imaging’s President and CEO. “We are especially excited to also announce our first Canadian sale to Dr. Gregory Czarnota and Sunnybrook Health Sciences Centre and Sunnybrook Research Institute in Toronto, ON. Dr. Czarnota’s important clinical research in apoptosis is trying to better understand the molecular mechanisms by which diseased cells die and therefore, how therapy can be most effectively applied. We are privileged to have our ExactVu platform being used in Sunnybrook’s clinical practice as well as in its innovative research efforts.”