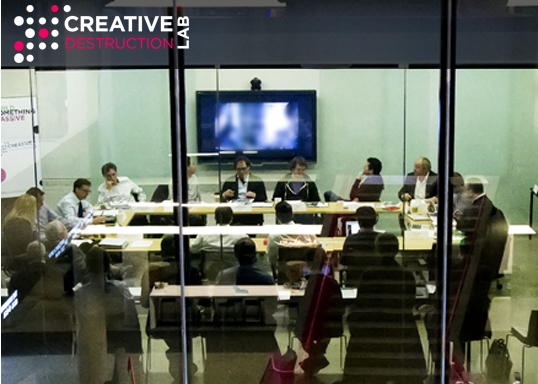 Attention Toronto startups: Creative Destruction Lab (CDL) is now accepting applications for its third cohort. Founded in 2012, (CDL) based at Rotman School of Management at University of Toronto is quickly becoming a significant force in the startup community.

Creative Destruction takes on a cohort of high-potential ventures each year and provides exceptional mentorship through its ‘Group of Seven’ (G7), an all-star lineup of entrepreneurs including Jevon McDonald, Daniel Debow, Ted Livingston and John Francis. In just two years, Creative Destruction ventures have already generated close to $130 million in equity.

CDL startups are expected to perform, hit a number of important milestones and grow viable businesses. Bionym, Thalmic Labs, PUSH, Whirlscape, Taplyptics, OTI Lumionics and many other startups that went through the CDL still rely on the community and investor networks they developed during their time in the program. Like OTI Lumionics, many have gone from survival mode to gliding on the long paved runways and building quality products.

Take Bionym: “Bionym had entered the CDL with a relatively small vision of what it could achieve. During the program, we made a major pivot, supported by the advisors, which has led us on the path that we’re on today. The breadth and depth of insight that we were given access to was phenomenal,” said CEO Karl Martin. To this day, Martin relies on CDL for ongoing support from the advisors and other entrepreneurs. One of the advisors who invested in Bionym’s seed round of funding, Dennis Bennie, remains on Byonim board.

“We have gotten phenomenal results with very little investment, and the best part is that we’re just getting started,” said Debow, a serial entrepreneur (Rypple, Workbrain) and a founding member of CDL. “Creative Destruction Lab is still at the early stages of what’s possible. Think of how many billions of dollars, thousands of jobs, and amazing innovation can come out of this. U of T has some of the best bioengineering, science, chemistry, physics, and computer science programs, and we should be doing more to commercialize and unlock that R&D.”

Creative Destruction is still accepting applications from interested startups for the third cohort at the Lab. Think you’re a fit? The deadline to apply is August 28.

“We reward performance,” said director Jesse Rodgers. “We have a structure of milestones: every eight weeks, founders meet with G7 mentors, and are expected to deliver on business and technical objectives, or they don’t get asked back for the next meeting. Good companies get results and investment.”

Another benefit of having Creative Destruction at Rotman comes from connecting MBA students with entrepreneurs. Debow knows this hasn’t always been the case. “When I went to Rotman, there wasn’t as many ways to learn about the entrepreneurial process. Matthew Chapman and I were working on a startup. We might have been from Mars. But the idea of being an entrepreneur is not a crazy idea,” said Debow. “It’s a great way to build real companies, successful business.”

Despite being one of the largest data breaches in the world, exposing tens of millions of users’ personal information, BetaKit has shied away from…