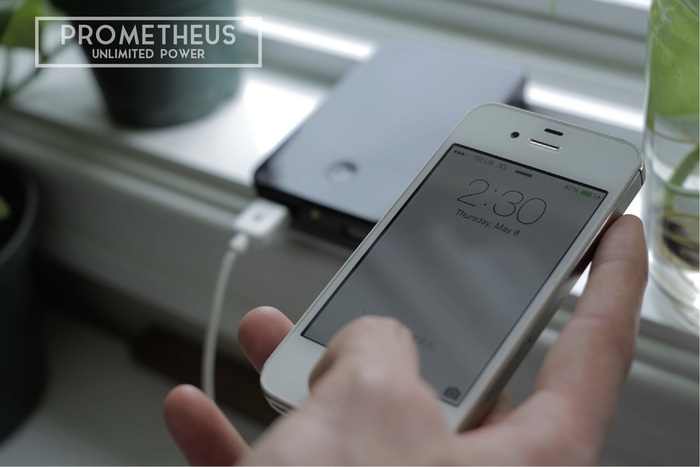 The Prometheus mobile device charger will definitely ship to its Kickstarter backers after nearly doubling its modest goal of $5,000 within 24 hours. There’s still 38 days left in the campaign and already the creators behind the device have raised over $9,200.

The Prometheus is a cool little device about the size of the adapter component of a Macbook charger. It provides mobile power for all your devices, and the ability to produce new power with your own hands, which is possibly the best part (and in my opinion, a logical and smart addition to a product).

Here’s some of the specs:

3. Hand-Cranked Power: Unlimited power in your pocket. Flip out the handle, and give it a spin. The sturdy crank can generate another 400 mAh by itself, which means even if the bank’s supply is depleted, you can always have energy at your disposal.

4. Flashlight: Hold down the power button for three seconds and get a beam of light for any occasion.

7. Compatible Across the Board: Some compatible devices include: Apple, HTC, and Samsung phones and tablets, readers, cameras, and even gaming handhelds like PSP Vita, MP3s, Nintendo DS. If it uses a USB port, it’s game.

“We hated the idea of getting caught without power for life’s important events,” wrote the product’s creator, Weiming Yuan. “We’ve bought some alternatives in the past. Unfortunately, they have little power, are not designed with us in mind, or are too expensive. Prometheus brings you unlimited power with beautiful design– all at our Kickstarter price.”

The current price on Kickstarter isn’t to shabby either: the initial early bird price of $49 is unavailable now that all 99 spots were snatched up, but the next option is only three dollars more and there’s tons left.

Again, I think the hand cranker really makes this product what it is. It’s a simple, logical addition that (ideally) will never leave a user without power so long as they have this product.

Convore Shutting Down as Founder Focuses on New Startup

Updated with comment from Convore co-founder Leah Culver. Group communication is a crowded space, as we wrote about when we covered the reaction of…