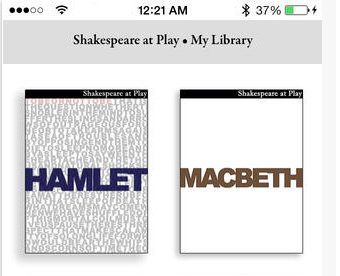 Toronto-based startup Shakespeare at Play have released the second version of its iOS app by the same name.

The app was created by four University of Toronto drama graduates, and brings full-scale plays, videos and iBooks to the device or tablet screen.

“Shakespeare wasn’t meant to be read, which is why reading his work can be so difficult and intimidating,” wrote the cofounders. “His words were meant to be brought to life in performance. That’s why our books provide a video of every scene, with simple staging to help keep the focus on the words and the story.”

The immediate goal for cofounders Tim Chisholm, Noam Lior, Daina Valiulis and Trevor Jablonowski is to get the app into the education stream. They want to help teachers educate students and bring a more engaging interface to today’s students to absorb and appreciate Shakespeare content. They’re just about to launch a pilot program throughout Toronto’s schools and are looking for English teachers to get it into their classrooms and test it out.

All of the productions are filmed in a theatrical setting but they’ve been “staged” for the camera. It gives viewers a sense of how the work is meant to be seen (on stage) while also taking advantage of the benefits of modern, digital filmmaking.

Every scene comes with a simple audio introduction by Noam Lior, a video performance of the entire scene, handy side-notes with points of interest and, of course, Shakespeare’s words.

Finally, the team was clever enough to act on the reason why so many of us fell asleep in grade 10 english while the tape casette of Othello played through our ear drums: because there’s so many words in Shakespearean english that we don’t understand! Each book on Shakespeare at Play includes a custom glossary with definitions for dozens of obscure words or phrases.

Other good news is that with this new second version of the app being launched today, Hamlet has been added.

Shakespeare on smartphones: “That it should come to this!“