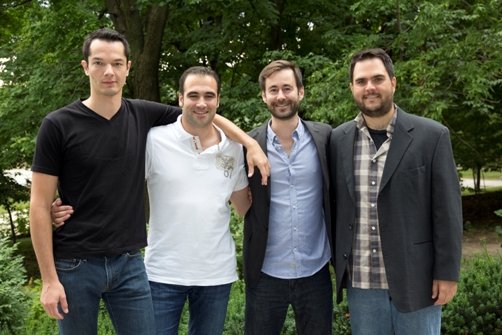 MissingLINK, a Montreal-based startup founded by four MBA grads, is headed to Santiago in November for seven months to participate in Startup Chile, the government of Chile-sponsored global startup accelerator.

MissingLINK strengthens the links between students, graduates, researchers, management and recruiters to facilitate opportunities for collaboration. It includes a social media platform that puts everyone in contact for different needs: students and graduates may use MissingLINK as a networking tool, recruiters can use it to seek candidates and student associations to find support, guidance and funding sources for their activities.

“Though Facebook is part of the daily lives of students, the network is limited to their close circle of friends and acquaintances and is used primarily for entertainment purposes,” Beaudoin told HEC Montreal News. “MissingLINK aims to serve the academic community by helping its members to get in contact with those persons likely to help them in taking the next step to reach their goal. It’s meant as a dynamic platform”

Startup Chile has widely been recognized as a positive initiative by the Chilean government. Any startup from around the world can apply. The program aims to attract young entrepreneurs with great potential to start up their companies in Chile in an effort to position the country as a centre of excellence in innovation and entrepreneurship in Latin America. About 85 companies are selected by experts from Silicon Valley (entrepreneurs, scholars, investors) and the Subcommittee of entrepreneurship and innovation of InnovaChile. Those companies are given $40,000 in equity-free seed capital and work out of Santiago for seven months, taking advantage of mentorship, events and networking.

This year 1,386 business ideas from 63 countries applied for the 85 positions. The program’s first application process in 2011 brought 87 startups to Chile from over 30 countries, after having received 330 applications. During the second process in July 2011, more than 650 startups applied for 100 slots.

Spending seven months in Latin America building a business, particularly in a place like Santiago, sounds like an amazing opportunity to me. Not only do these entrepreneurs escape the at times self-validating bubbles of North American startup cities, but they are able to live in a completely different environment. With a little effort, seven months is enough time to learn Spanish too, no doubt something that will help these entrepreneurs whether they continue to live in Chile or not.

According to the HEC Montreal website, the idea for MissingLINK came about at the second edition of Startup Weekend Montréal, organized by HEC Montréal on the weekend of February 8-10, 2013. As part of this event, participants had to develop a business project within 54 hours.

The MissingLINK team carries some decent experience as well. Beaudoin served as President of the HEC Montréal-MBA Student Association (AEMBA) in 2012-13 and has more than 10 years of experience in information technologies (IT) at the international level. As an engineer, Bonnet has more than seven years of experience in managing industrial projects and held the role of director of entrepreneurship at the AEMBA. Tardif, also an engineer, has over six years of experience as a programmer analyst and IT business analyst. He also assumed the responsibilities of Vice President of the AEMBA. Finally, Turcotte is an experienced biotechnology researcher who lived in Silicon Valley for several years and contributed to the start up of Volochem.

Edmonton-based Jobber announced today that it has integrated its cloud-based service software with global payments company Square. The integration allows Jobber customers in both…