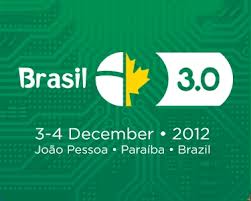 Canada may be spying on Brazil, but hey, who cares? At least our startup companies are cooperating together!

Ten Canadian startups are heading to Brazil early next month to pitch their ideas in a joint venture created by the Comitê Gestorda Internet (CGI) and the Canadian Digital Media Network.

The ten companies will pitch their visions along with ten Brazilian companies in Sao Paulo on December 3rd, and attend the Brasil-Canada 3.0 conference taking place in Joao Pessoa from December 4th – 6th, 2013.

According to the CDMN, it represents an “excellent opportunity for companies looking to expand into the fast-growing Brazilian IT market,” and meet investors, potential partners and Brazilian peers. The CDMN is a federally-funded “Centre of Excellence in Commercialization and Research,” and is dedicated to establishing Canada as a world leader in digital media. The CDMN’s network includes 25 regional “commercialization hubs” across Canada, 3,352 startups and SMEs, 2,960 companies in the ICT industry and 166 academic institutes.

The Brasil-Canada program will include opportunities to meet with potential customers and investors from Brazil, as well as the ability to learn about the Brazilian market from companies with experience in country. The Canadian and Brazilian winners of the pitch-off competition will also be sponsored by Open Text to attend the Canada 3.0 conference, taking place in Calgary May 26th – 28th, 2014.

The program came from commitments made by Prime Minister Harper and President Rouseff in 2011 to “increase collaboration in the ICT sector”.

“Helping Canadian businesses find success in large, dynamic markets like Brazil helps create new jobs and opportunities here at home,” said Ed Fast, Canada’s Minister of International Trade.  “Attending Brasil-Canada 3.0 will provide ten dynamic Canadian companies with the opportunity to expand into a market that is a priority for our government, and help us take the Canada-Brazil economic relationship and friendship to the next level.”

Ricardo Sordre, CEO of the Brazilian accelerator Project-1, said that many Brazilian startups are in need of expertise and technologies not yet avaiialbe on home soil. “And the wealth of startup companies and technology talent in Canada can help fill that need,” he said. “At the same time, the fast-growth, high demand Brazilian market can help Canadian companies find the customers and investors necessary to facilitate growth.”

Interestingly, the CDMN indicated that it wanted to select high-growth startups with proven track records. That said, it seems that newer, more inexperienced startups with less tangible results probably had no chance of being selected. It would have been encouraging to see a few of these such companies with little tangible sales, yet high potential, to be able to participate.

164 applicants competed for the ten spots, which were decided by a panel consisting of  Sodre, the CDMN’s Kevin Tuer and OMERS Ventures’ Sid Paquette. The cross-country representatives include the retail, wireless, security, education and tourism sectors. The companies selected had average revenues of $1.3 million, “which is projected to increase markedly over the next year through international expansion.”

The CDMN also provided us with a nice infographic to illustrate the news:

New York-based startup Zipments launched in Vancouver yesterday, and is a site that provides low cost, same day courier services to retailers throughout the Vancouver…