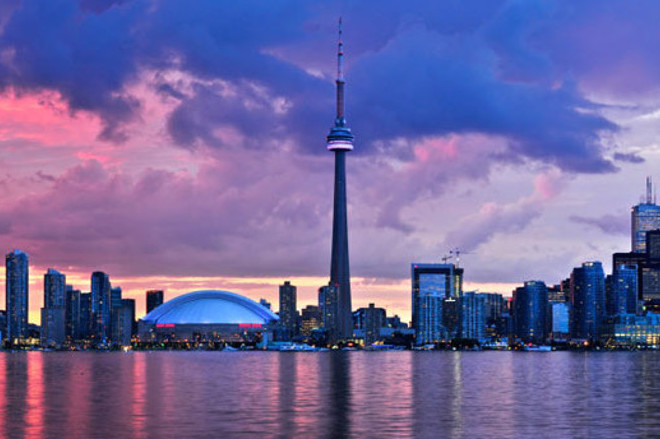 As more Toronto tech founders grow businesses and raise millions, people from all industries — especially those being disrupted — can’t help but get caught up in the innovation hype. Many large institutions are setting up innovation centres in the city, while Mayor John Tory has, on more than one occasion, gone abroad to promote the city’s growing tech sector.

“The data reflected Toronto as the leading tech hub for Canada at a level comparable with other global tech leaders like New York or Silicon Valley based on the proportion of tech jobs to the economy overall.”
– Joshua Wright, Emsi

But how much is Toronto’s tech sector growing? And how can the city ensure its harnessing and fostering this sector in a way that’s effective? TechToronto — working in collaboration with PwC, the Innovation Policy Lab at the Munk School of Affairs, and economic data modeling firm Emsi — has attempted to answer these questions through a report providing an all-encompassing look at Toronto’s tech ecosystem.

The report provides data on how Toronto’s tech ecosystem is expected to grow, how this growth will impact the city’s economy, and recommendations for public officials to foster growth in Toronto’s burgeoning technology sector.

“This report will help our community recognize itself and grow with Toronto’s public policy leaders,” said Alex Norman, managing director at TechTO, adding that he encourages the tech community to share the report and bring attention to why tech is so important to the city’s ecosystem.

“At Emsi, our data has shown global economies experiencing exponential growth for tech-related roles across all industries,” said Joshua Wright, director of marketing at Emsi. “For the report, the data reflected Toronto as the leading tech hub for Canada at a level comparable with other global tech leaders like New York or Silicon Valley, based on the proportion of tech jobs to the economy overall.”

“One of the major findings here is that tech isn’t a niche market anymore. There are more tech jobs outside of the tech industry than there are within it,” said Adam Thorsteinson, who works in user experience and analytics at PwC. According to the report, since 2010, the tech industry has added 51,000 jobs in Toronto, while finance added 17,000, and manufacturing has been reduced by 5,000 jobs within the same time period. Thorsteinson says this is because of both the rise of entrepreneurship and non-tech industries embracing tech to power their processes.

“In terms of growth rate, we’re seeing the fastest growth within the tech industry — tech jobs specifically, and entrepreneurship is fuelling a lot of this growth. But in terms of sheer numbers, most tech jobs in the last five years were added in what were traditionally non-tech industries,” he said. “Every single industry is being affected by tech. So it’s really a combination of the strong entrepreneurship ecosystem here in Toronto and the increasing importance of tech skillsets within non-tech companies that are creating such dynamic growth.”

“The trend of technology impacting our ecosystems, small and large, is becoming more clear than ever. All industries are benefiting from tech occupations and their work has made our economy advance quickly and built a global reputation across tech disciplines,” said Jesse Albiston, PwC’s innovation program manager. Albiston managed the creation of the TechTO report. “Tech clusters are highly employable and create complex outputs, making the economy more resilient and robust, but some cities have more talent than others based on education and employment opportunities. Regardless of where a tech job is located, it is developing skills and outputs for a resilient economy and is worth recognizing and supporting.”

The report looks at factors that contribute to economic resilience as a measure of determining Toronto’s economic performance; describing resilience as “an economy’s vulnerability to crises and its capacity to absorb and overcome shocks while supporting strong growth,” the report measured diversification, decentralization, and income equality of Toronto’s tech sector.

Using the Economic Complexity Index (ECI), which counts the number of industries in a city and assesses its uniqueness against other regions, the report determined that Toronto had the highest ECI in all of Canada. In general, the tech industry tends to be associated with diverse city economies, as economies that rely more on natural resources tend to have lower ECIs.

“Making the right policy choices going forward will require meaningful collaboration with Toronto firms as well as coordination across governments.”

“The key to understanding this relationship between tech employment and economic diversity is the uniqueness factor. Big tech ecosystems are relatively rare across Canada at this point in time,” said Thorsteinson. Out of 33 cities in Canada, only five cities — Toronto, Montreal, Vancouver, Ottawa, and Kitchener-Waterloo — have high employment across a variety of tech industries. “That’s what’s causing tech employment to be so highly correlated with economic diversity scores. Toronto’s tech ecosystem is one of the things that sets us apart from other cities across the country.”

“It’s important to note that this analysis only scratches the surface of income equality. The wage gap between men and women has increased since the recession, with women now earning only 72 percent as much as men for the same type of work — and this issue persists across all industries, including tech,” the report reads.

The report touches more on encouraging diversity in its section dedicated to public policy recommendations. As the tech sector continues to grow, there is a need to encourage people to pursue postsecondary education in STEM, and encourage people from all walks of life to participate in this high-growth sector. Currently, women, which are 51 percent of Canada’s population, represent 29.6 percent of people with a STEM degree, and Aboriginal people represent 1.4 percent of people with a STEM degree. The report recommends expanding programs that attract youth to STEM, such as Girls Learning Code.

“As our report illustrates, all levels of government have a role in ensuring that policies support the success of Toronto’s tech sector. Making the right policy choices going forward will require meaningful collaboration with Toronto firms as well as coordination across governments,” said Travis Southin, a researcher at the Innovation Policy Lab.

The report also recommends fast track immigration visas for tech companies — a recommendation many in the space have supported — making housing more affordable for the 43.6 percent of Torontonians that are precariously housed, and getting Toronto and Kitchener-Waterloo recognized as a FinTech and machine learning hub.

“Toronto education programs have created world-leading experts in the field of AI, machine learning, biotech, and other tech verticals. In Silicon Valley, talent has been their word for Canadians in Toronto and Waterloo based on the incredible work worldwide from technical program graduates,” said Albiston.

At the same time, the report argues that Toronto’s regulatory environment could be stifling innovation, citing a separate 2015 report by the Innovation Policy Lab, which found that the most cited obstacle to FinTech innovation was regulation. “Regulators wanting to further support innovation should set industry-specific standards that facilitate experimentation as well as open opportunities for Canadian companies to pilot in other countries,” said Mike Katchen, CEO at Wealthsimple.

To create a more startup-friendly regulatory environment, the government — particularly provincial — should work to support high-growth, early stage startups. Currently, Ontario’s business support programs tend to favour older and larger companies; in 2014, the Expert Panel Examining Ontario’s Business Support Programs found that average support for companies with less than $0.5 million in revenue was $4,333, companies with more than $20 million in revenue received an average of $231,255 between 2011-2012.

“Tech companies are growing exponentially faster and becoming profitable quickly,” said Albiston. “We believe tech as a nascent leader for our ecosystem in its current state is only beginning. Tech companies that are solving real problems are pushing corporate effort and innovation, which is healthy for everyone. With the help of corporate partners, accelerators and education programs, identifying these disruptive companies and entrepreneurs who are passionately pursuing meaningful problems worth solving will be time well spent.”