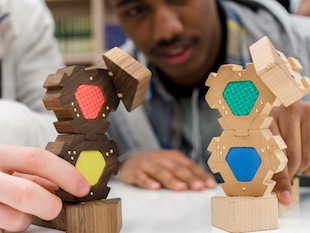 Why not kickstart a toy revolution? Toronto-based startup Twenty One Toys scored a recent win on Kickstarter with more than $50,000 from 467 backers, hitting over 110% of its goal. Until this week, the startup survived on loans, grants and pre-sales.

Founded by industrial designer Ilana Ben-Ari, Twenty One Toys creates “toys for 21st century.” Initially designed as a navigational aid for visually impaired, the wooden, highly textured three-dimensional toys connect into puzzles intended for two people to play  —  blindfolded. Each team gets a finished puzzle and must work together to replicate the model. Ben-Ari designed the original toys as a university thesis project, working with Canadian National Institute for the Blind.

“It’s been incredible to see all that community support,” said Ben-Ari. “I had a strong background in math and science, and was discouraged to take art classes in school. I think that to be creative, we need to be empathic. Play unlocks skills that aren’t commonly taught in the classrooms today — creativity, collaboration, and empathy.”

Most pledges came through an experimental at-home playkit, an unexpected draw. Ben-Ari designed the kit for parents of school-age children to play with family and friends. Thanks to the Kickstarter success, Twenty One Toys will place the first bulk manufacturing order for 1,000 toys to “respond to the demand from schools, parents and educators.” The Dufferin-Peel Catholic District School Board already uses the toys in its classrooms.

“As we age, we learn less through play, which these toys really bring back. It’s a really cool project and I’d love to see it be successful,” says Emma Woolley, writer and digital content manager from Toronto, who backed Twenty One Toys on Kickstarter. “The new dad in me couldn’t help myself,” says Dave Kranenburg, director of programming at Centre for Social Innovation.

Ben-Ari says Kickstarter campaign success has proven her concept and helped get media attention and community support. “It was a tough month. We came up with a video to explain the product and how a Kickstarter campaign works, because it’s still a new concept to our audience,” said Ben-Ari. “We analyzed our collective networks, crunched our numbers, responded to every question and got lots of feedback. It’s great to see our efforts finally pay off.”

2013 was a great year for crowdfunding in Canada. What’s interesting about Twenty One Toys is how it showed that the platform is ready for non-technological products. Perhaps it’s time to take play a little more seriously.