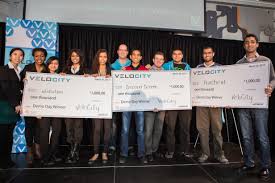 VeloCity, the University of Waterloo-based campus for entrepreneurially-minded students, has announced that its $100,000 VeloCity Fund Finals will happen on November 28.

Ten startups from the University of Waterloo will compete for their share of over $100K in grant funding. Over the month of November, several competitions will decipher which ten startups will get that chance to pitch their startup ideas on-stage. From those ten, four winning teams will each get $25,000 grants and a place as one of 30 startups operating at the VeloCity Garage in downtown Kitchener.

Additionally, ten entrepreneurs will have the chance to pitch their startup ideas for three $1,000 prizes. So yeah, there’s going to be lots of money floating around that day. It all happens at the Great Hall at the University of Waterloo, beginning at 11 am. The events will be live streamed.

Ilan Saks, founder of Canada’s first student-run venture capital firm, FounderProject, told BetaKit that he’s long valued the initiatives VeloCity are taking. “Anything that further equips young, bright student entrepreneurs to make large strides in the fast-paced startup world is beneficial for our ecosystem. What they’re doing at the University of Waterloo is great for Canadian innovation in general.”

Just one player in Waterloo’s thriving technology ecosystem, the VeloCity Campus is arguably the most successful startup-focused initiative by any Canadian university (there’s also Ryerson’s Digital Media Zone and the University of Toronto’s UTEST incubator, to name a few).

As long as one of the members of the startup is a student or alumni of the University of Waterloo, a team can gain admission into the VeloCity Garage, a 7,000 square feet space of free co-working space where startups can develop, test and implement their startup ideas. Some notable past and present startups who have worked out of the VeloCity garage include Kira Talent, Media Spot Me, and the maker’s of the popular MYO wristband, Thalmic Labs.

The VeloCity Fund Finals, however, is geared towards student startups that haven’t yet worked out of the Garage space, and ideally, some that will go on to enjoy similar success like Thalmic Labs’.

Since its creation, over 45 companies have benefited from the resources, community and connections given to them by the VeloCity Garage — and raised over $90 million in funding.

The VeloCity brand is actually quite large, comprising of a number of programs housed in the University of Waterloo campus that takes its name. There’s even a VeloCity Residence, which provides a unique opportunity for University of Waterloo students to live in an innovative and entrepreneurial environment right on campus. Students are given access to the latest technologies and the opportunity to learn from a great network of mentors and entrepreneurs.

Startups are known for their fun and flexible workplace cultures open to embracing different ways of working. A few months ago, BuildDirect allowed employees…