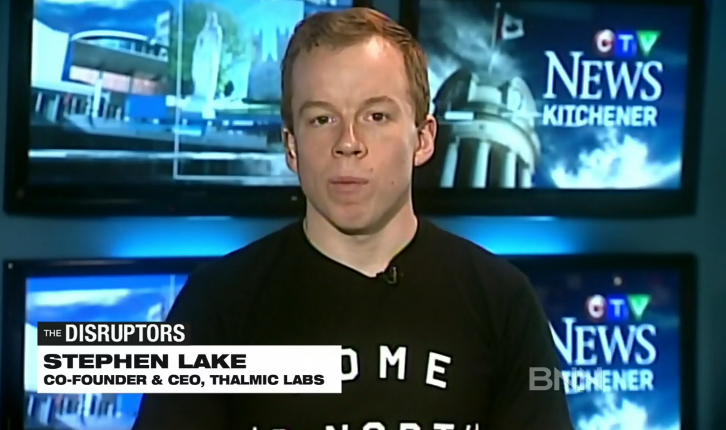 In the latest episode of The Disruptors, Thalmic Labs CEO and co-founder Stephen Lake discussed how the company will be using its recent $120 million USD ($158 million CAD) Series B to drive growth, and the direction Thalmic Labs in heading in.

Thalmic Labs has developed the Myo armband, which allows humans to interact with computers using the motion of their hands. According to Lake, the funding will be directed towards further research and development for its next product, and allow the company to deliver on its product vision more quickly.

“We just don’t have that excuse anymore of not having the resources,” said Lake. “It’s enabled us to continue to make some pretty aggressive investments in that product development and research development and ultimately, we hope it will enable us to do that at a faster rate.”

Lake added that Thalmic Labs will hire more people, as it currently looking for applicants to fill 40 roles. The funding will be used to enhance the company’s new manufacturing facility in Waterloo, where Thalmic Labs’ next wearable device targeting the consumer market will be developed.

Co-host Amber Kanwar said that when companies raise large funds, they often use a large portion of it for things other than what a company mentions and raised the question of whether Thalmic Labs would do that. Lake said that while “a big portion of what’s announced could have been used for other things, this is money going into the company directly into those things mentioned,” and that it’s not a “buyout for early investors.”

Lake says that Thalmic Labs has a strong team when it comes to the technical side of product development, but the company is looking to build its team in areas such as the marketing and consumer experience, and in roles that require specialized talent. To do this, Thalmic Labs is pulling talent from within and outside of Canada. In September, the company opened a San Francisco office and hired former Samsung exec Tara Kriese as its CMO.

“[When it comes to] specialized roles…it becomes harder to find those people in narrow fields,” said Lake. “For Canadian companies to continue to innovate and grow those teams…we have to be able to go out and access the top people in their respective fields from around the world and very quickly bring them in here.”

Speaking to co-host Bruce Croxon after the interview, Kanwar said she tried to ask Lake what the company was developing, but commented that Thalmic has been very tight-lipped about it. “They’re like Apple in that way,” she said.