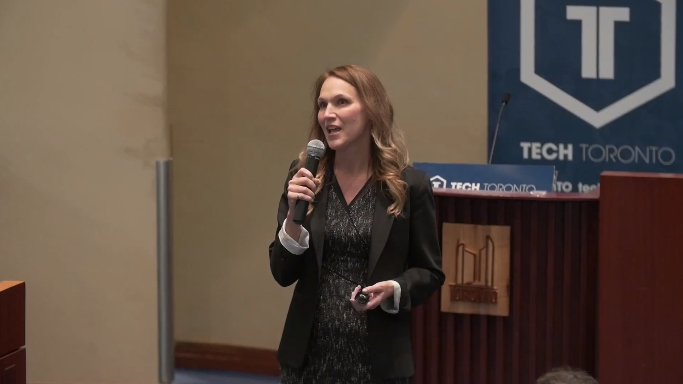 For entrepreneurs looking for ways to pitch a product with the right context, April Dunford of Sprint.ly has some words, and a few jokes, of advice.

At the latest TechTO, Dunford talked about the importance of context, especially when pitching a new idea. She gave the example of a joke her son told her.

“People make assumptions based on the context within which they’re pitched and often those assumptions are wrong.”

Dunford said the reason the joke is funny is because a ten-year-old told it. The context of the joke causes people to make assumptions that his joke will be potty humour. This can be applied to a startup, too.

“The same thing happens when we pitch new products. People make assumptions based on the context within which they’re pitched and often those assumptions are wrong,” said Dunford.

Dunford said that entrepreneurs and product developers are constantly trying to deliver something that no one has ever seen before. This can be difficult because the new product can be very hard to understand. With her experience launching 15 products, the entrepreneur says she can give others a hint as to why this happens.

“Whenever we have an idea, it comes from the thought process that we can improve on something that exists already,” she said.

With all of the ideas and revisions that happen, the entrepreneur often ends up with a product that is nothing like the product they were originally trying to improve. The change happens so gradually that it can be hard to notice.

This can confuse the customer, since they’re given the context of the old product, rather than the new one.

“We say ‘Hey how do you like my car back there? Looks good right. It’s Car 2.0’,” said Dunford. “And meanwhile our customers are sitting there going ‘I dunno man. You said it was a car, but all I’m seeing is a murderous robot and I’m confused. Not only am I confused but I’m frightened.”

Dunford offered some advice on how to fix this, which is to give customers the right context for the new product.

Dunford added that when entrepreneurs bring the old way of thinking into their new ideas, the old way will win. Audiences will think that there is nothing wrong with the original product and reject the new idea.

The next TechToronto takes place on April 3. Get your tickets now!

The University of Toronto revealed the winners of its Hatchery Demo Day, the University’s innovation hub dedicated to helping students build and commercialize products….