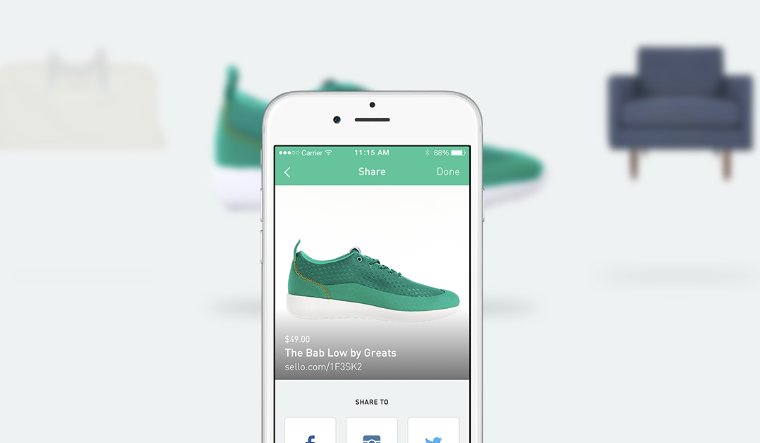 Ottawa-based Shopify has launched a new mobile app this morning, called Sello. As the name and the company’s heritage would imply, the app allows consumers to sell stuff. It’s the how and why that differentiates Sello from Shopify’s core product.

For Sello, Shopify has ditched the shopping cart in favour of social media.

For Sello, Shopify has ditched the shopping cart in favour of social media, allowing anyone to snap a pic of their item, and push a sales link to Facebook, Twitter, Instagram, and several other social media channels.

“Ecommerce is still out of the hands of too many people. Sello removes those barriers, helping people focus on ideas they believe in,” said Shopify Product Manager Chris Lobay. “We’re giving them a simple, fast, and approachable way to sell for the first time.”

Shopify’s supposition is that the common consumer folk who might never have need of a full Shopify store would take advantage of a simplified mobile app to hawk their wares. It also may be an excellent lead gen tool to onboard entrepreneurs onto the company’s more robust ecommerce options after getting a taste (Shopify is producing tutorials to teach neophytes how to sell). Smartly, Sello doesn’t take any transaction or listing fees (although processing fees from payment providers will still apply), further lowering the barrier of entry.

“We assume there are going to be people who are selling very occasionally, like used goods or collections or whatever. But I think we’re putting [Sello] into the hands of people who are aspiring entrepreneurs,” Lobay told VentureBeat.

Erin Bury, advisor and investor in Toronto-based Willful, is jumping with both feet into entrepreneurship, replacing her husband and founder Kevin Oulds as CEO…