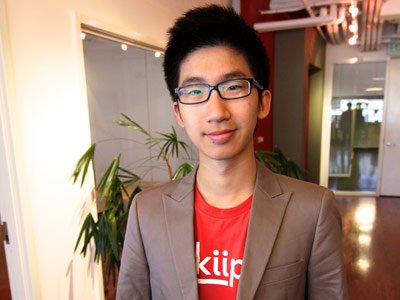 “These founders and funders, brand builders and do-gooders aren’t waiting for a proper bump up the career ladder,” wrote Forbes. “Their goals are way bigger — and perfectly suited to the dynamic, entrepreneurial, and impatient digital world they grew up in.”

Here’s a quick look at what Forbes had to say about these high achieving Canadians:

“‘Moments of achievement’ and ‘serendipitous rewards’ are a big part of the future of advertising, at least according to Wong, who cofounded Kiip in 2010, a year after graduating from the University of British Columbia at age 17. ‘We track almost half a billion of these achievement moments every month,’ he says. ‘These are moments that brands can be a part of and own.’ In three years Kiip has raised $15.4 million and is now used by more than 500 major brands to reach 70 million users through 1,500 games and apps. Procter & Gamble, Pepsi and Disney are clients. He expects to be profitable next year.”

(Wong was the first person featured in the marketing section and Forbes featured a short video interview with him. He said, “I hang in there because cool stuff is about to happen,” and gave the advice of “don’t be overly aggressive about things.” He said the toughest decision he made was moving away from home (Vancouver) to San Francisco, “which was one of the best decisions I’ve ever made.”)

“A novel idea for helping care for patients after surgery: a mobile app that lets a hospital keep in close touch with them to help reduce hospital readmissions. Liu’s app won first place at Canada’s national eHealth conference. It will be going live in four hospitals across the U.S. and Canada over the next few months,” wrote Forbes.

“This former intern at Blackberry put $45,000 into a music sharing service for the company’s free phone messenger, then started his own messaging platform Kik when Blackberry’s wouldn’t work on other phones. He is now CEO of the Waterloo-based startup, which has 100 million registered users and is growing quickly,” wrote Forbes.

“This graduate of Canada’s University of Waterloo launched the most successful Kickstarter project of all time with his e-paper smart watch Pebble, raising a record $10 million. Silicon Valley venture capitalists have since funded him with a further $25 million. Pebble, which displays smartphone notifications via Bluetooth, sprang from his irritation with an ever-chirping smartphone,” wrote Forbes.

“In his nine years of experience, Blais has created digital, social and branded-content campaigns for brands such as Heineken and PepsiCo. His work has garnered awards from the Cannes Lions International Festival of Creativity, Effies, The One Show and Webby Awards, among others. A McDonald’s campaign, ‘Our Food. Your Questions,” recently won nine Golds and Best In Show at the Canadian Marketing Association’ Awards. He has been shortlisted as a ‘Marketer on The Rise’ nominee by the American Marketing Association and The Marketing Hall of Legends.”

Lusted founded WestonExpressions, a technology corporation providing hardware and software innovations for the out-of-home advertisement industry, after winning the University of Waterloo’s Innovation Showcase and VeloCity Venture Fund in his second year of business and environment studies. That lead to the development of Linkett technology. Linkett is a small device that enables digital screens to collect data about passing consumers and optimize the digital content toward their demographic.

“A game designer at Ubisoft Montreal, “missharvey” is best known to the outside world as a pro player, and has numerous awards to her name, including four Counter Strike world championships. Harvey also founded the female gaming powerhouse team UBINITED,” wrote Forbes.

Today Nara launched mobile versions of its personalized restaurants recommendation tool, available for free for both iOS and Android. Along with the web platform, Nara’s mobile…