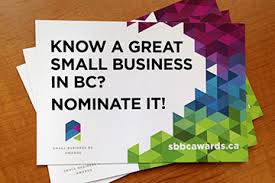 British Columbians have voted and the top ten B.C. businesses in eight award categories have been announced as part of the Small Business BC Awards contest. Several startups we’ve covered in BetaKit were also mentioned.

The awards are put on by Small Business BC, a organization that provides entrepreneurs with the information and guidance necessary to build a solid foundation for their business through products, services, education and resources. It’s funded by Western Economic Diversification Canada and the Ministry of Jobs, Tourism and Skills Training. The contest was also put forth by the Insurance Bureau of Canada, the national industry association representingCanada’s private home, car and business insurers.

The top ten semi-finalists were selected by residents of B.C. through online voting. Nominees had two months to gain as many votes as possible for their business using social media, e-communications and word of mouth. Those with the most votes in each award category have been named top ten semi-finalists in the competition.

This year a total of 417 nominations were received and 37,650 votes collected.

“It’s fantastic to see so many small businesses being recognized, not only for their success, but also for the positive impact they’re having on their local communities and the contributions they’re making to the economy,” said Small Business BC CEO George Hunter. “With the high quality of nominees this year it’s going to be a tough job selecting the winners, but we’re very excited to see who comes out on top.”

Businesses in several industries were nominated from 55 cities across B.C, including in manufacturing, technology and hospitality. Nominations for the awards increased this year by 122 per cent.

“IBC congratulates Small Business BC on the significant increase in participation in their awards contest this year. It’s clear that many talented small business owners see the awards process as a growth and development opportunity and that their customers are committed to acknowledging success. We wish all the finalists continued success in the next round of competition,” said Bill Adams, IBC Vice-President, Western and Pacific.

The top ten semi-finalists must now complete an extended award application which will be used to narrow down the competition to the top five finalists in each category, to be announced on January 30, 2014.

The overall winners will be honoured on February 27, 2014 at the Small Business BC Awards Ceremony at the Pan Pacific Hotel in Vancouver.

Here’s this year’s nominations. Among those startups we’ve written about are Disruptive Media Publishers and Roam Mobility.

League, Mogo among regional finalists for Ernst & Young’s Entrepreneur of the Year awards

Ernst & Young has named the regional finalists across several categories for its EY Entrepreneur Of The Year 2017 awards program. The awards program…