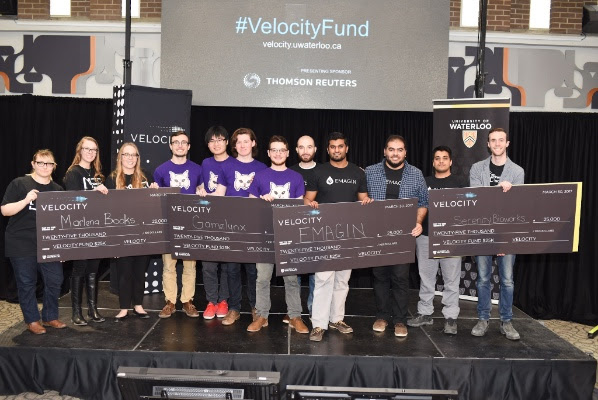 The University of Waterloo hosted their 18th annual Velocity Fund Finals, where 20 companies pitched for a share of $125,000.

University of Waterloo students and alumni had three minutes to pitch to a panel of VCs and judges from the investment, business, and startup communities. Seven startups in total were awarded a portion of the money.

“I am pleased to announce that companies we have supported, many having won here at the Velocity Fund Finals, have collectively raised more than $500 million dollars in funding,” said Jay Shah, director of Velocity. “This is a clear signal that investors—people whose jobs are to identify promising businesses—are putting their money into companies born right here at the University of Waterloo.”

Four startups won the top prizes of $25,000 each: EMAGIN, which helps make water utilities safer by using AI to learn about historical events and predict outcomes; Gamelynx, which creates games and interactive experiences for face-to-face play, combining the social interaction of party and board games with the convenience of mobile web gaming; and Marlena Books, which creates therapeutic recreation products for individuals with Alzheimer’s or dementia.

Serenity Bioworks, which develops medicine formulas to improve the long-term effectiveness and safety of anti-inflammatory medication, won a total of $35,000 after receiving an extra $10,000 in funding for the additional costs associated with building a science-based startup.

These startups will also receive workspace in the Velocity Garage and $5,000 in IP legal services from Perry + Currier Inc.

The winners of the $5K competition included Para, a cloud-based application that guides adults in creating a comprehensive estate and end-of-life plan; Rugelach, Roswell and Rufus has created an EMS spine board to more accurately weigh children in paediatric emergencies; and ShiftRide, a car sharing platform that allows people to rent a car from other people nearby, each won a $5000 prize.

The next Velocity Fund Finals are set to take place in July 2017.

Photo by University of Waterloo.

Several BC Startups Named Finalists in Small Business BC Awards

British Columbians have voted and the top ten B.C. businesses in eight award categories have been announced as part of the Small Business BC…