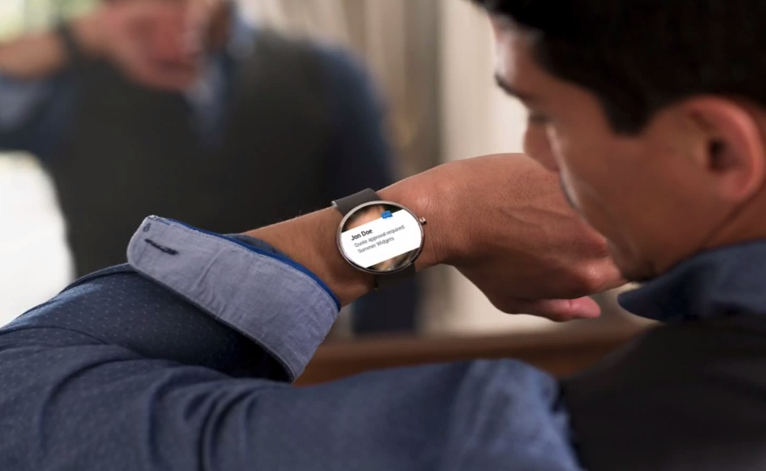 As MobileSyrup‘s Tom Emrich reported, Salesforce Wear offers developers a set of tools as part of a Developer Pack to foster the creation of enterprise apps for wearables.

Salesforce has partnered with ten wearable companies to foster an ecosystem around enterprise in this sector including major tech leaders like ARM, Google, Philips, Fitbit, Pebble and Samsung. Other selected companies, like Thalmic Labs, Bionym, OMSignal, are Canadian or have Canadian roots. And in fact, the Salesforce wearable initiative itself is spearheaded by fellow Canadian Daniel Debow, SVP of Emerging Technologies at the company.

For startups like Toronto-based Bionym, makers of the heart beat authentication bracelet, Nymi, having a large enterprise player select them as a partner is a big deal. “It’s great validation of the unique value the Nymi brings to enterprises,” Bionym’s Andrew D’Souza, told Emrich. “Solving the identity problem in an elegant and secure manner is incredibly valuable for businesses, allowing them to focus on creating better experiences for their customers.”

For Salesforce, the Wear program “stays true to its innovative roots and ensures that the company is keeping pace with emerging technology for its clients.”

“Wearables are the next phase of the mobile revolution,” Debow told MobileSyrup. “With Salesforce Wear, companies can now capture the massive opportunity these devices offer to connect with customers in new ways.”

Six of the partner companies are featured in the Salesforce Wear Developer Pack, which includes a series of videos, links and sample code. If anything, the Salesforce Wear program is a destination for its 1.5 million developers to be inspired and get ideas on how to be a part of this new ecosystem. Salesforce does a good job at introducing the new devices they have selected, wrote Emrich, taking it one step further by creating a starter app for each, with code available on Github for developers to tweak for their own purposes.

The apps are as much about showing the enterprise-focused use cases available for the devices as they are about featuring how existing Salesforce web and mobile APIs can be integrated within a wearable app. Salesforce illustrates how a heads-up display like Google Glass can be used for on-site inspections; or Thalmic Labs’ gesture control armband, Myo, could be used by doctors to swipe through X-Ray images.

To create the Nymi starter app, D’Souza said Bionym gave Salesforce early access to its SDK and worked closely with the Salesforce dev team to foster its growth. Salesforce shows how Bionym’s authentication bracelet, Nymi, could be used by a hotel to register its guests.

Outside of the developer support Salesforce is providing with Wear, the most important thing it is doing is bringing credibility to a tech deployment in its infancy. A trusted enterprise player like Salesforce throwing its weight behind wearables as the next wave of computing will only help ease any hesitations and concerns coming from CIOs or CMOs about jumping into this space. D’Souza agrees: “This move marks the first major entry for an enterprise company into the wearables space, which is significant,” he said. “In a few years, we’ll see wearables in the workplace as an inevitability, much as we do with mobile today, and integrations into the Salesforce1 platform will only accelerate that trend.”

Debow told MobileSyrup that the launch of Salesforce Wear is just the start of things to come from Salesforce when it comes to wearables. We should expect to see additional technology added to the Developer Packs and some announcements around the use and storage of wearable data, especially from a marketing perspective.

#NACOSummit panel explains when companies should use AI

Last week, more than 450 angel investors, entrepreneurs, and other key industry players came together at the annual NACO World Angel Investment Summit in…