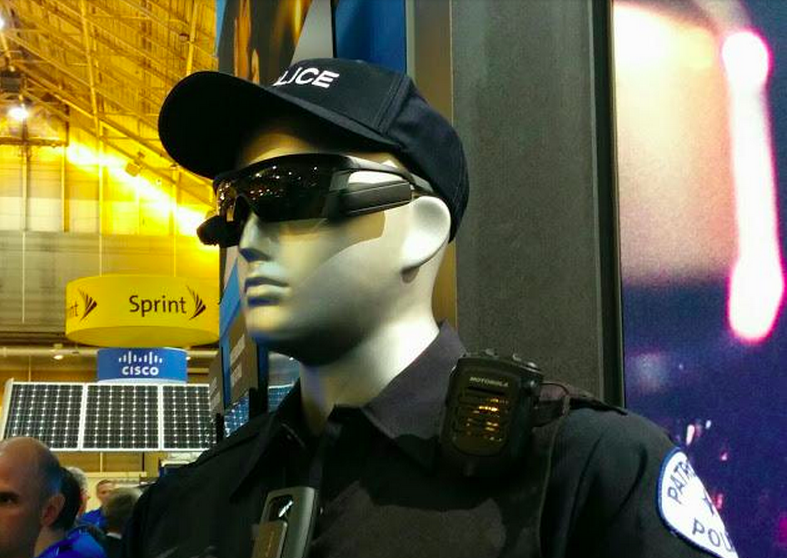 Recon Instruments, creators of Heads-up Display (HUD) and smartglass technology for sports and high intensity environments, spent the week in New Orleans, LA, to showcase some of its tech for police officers.

At the Association of Public Safety Communications Officials (APCO) Trade Show, the Vancouver-based company lended its Jet Smartglass to a trio of new technologies that made up the “Connected Police Officer Solution” at the show. Motorola’s APX Radio and LEX 700 Mission Critical Handheld were the other two technologies involved.

Recon Instuments’ Jet Smartglass is the first heads-up display for sports environments, and acts, as one would expect, much like Google Glass, showing the wearer several different helpful options. For a cyclist, it will show speed, heart rate, a map of a desired trip and much more. Currently its set to ship in just a few months, and can be pre-ordered today for a hefty $599. After that, the price will jump to $699.

Back to the “Connected Police Officer Solution,” the three devices create a personal area network around the officer to “augment situational awareness and enable Smart Policing.”

The APX radio pairs with the Recon Jet, ensuring that notifications from the APX radio can be processed without turning attention away from the scene. These notifications include channel/zone change confirmations, low battery alerts, and incoming messages advising officers to be on the lookout.

Upon activating an emergency on the APX radio, Recon’s Jet smartglass automatically takes a picture of the officer’s point of view and sends it via the LEX 700 into the Intelligent Data Portal over Band 14 Public Safety LTE.

Recon said that while the Jet smartglass platform was originally designed for sports it’s “ideal for the high intensity environments in which public safety personnel find themselves on a daily basis.”

The Jet is a true stand-alone wearable computer, with computing power equivalent to most smartphones on the market today. It includes a 1 Ghz dual core microprocessor, 9-axis sensor suite, on board HD camera with BT, BTLE, ANT+ and Wi-fi communication protocols, built into Recon’s hardware platform.

“Our products are designed to generate and deliver activity-specific information, instantly and hands-free, in the most demanding environments,” said CEO Dan Eisenhardt, CEO. “Now, through our relationship with Motorola Solutions, we see great potential in the public safety markets for seamless integration between Motorola’s public safety equipment and Recon’s smartglass technology. Receiving the right information at the right time in the most accessible manner possible will have high impact on first responders’ ability to execute their missions more safely and with greater effectiveness.”

Lightspeed has released its financial results for the fiscal fourth quarter and full fiscal year, ending March 31. The company, which went public in…