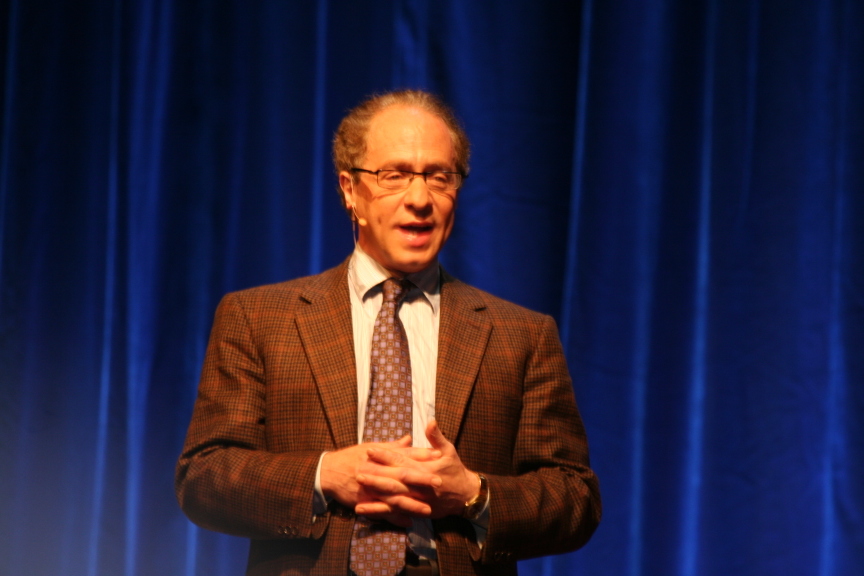 Technological Singularity author, inventor, and futurist Ray Kurzweil might have predicted his talk would be well received at BC Tech Summit at the Vancouver Convention Centre. His talk on “Strategies to Create the Future” left everyone in the room inspired to imagine the world at the point of technological singularity, where our biology and technology merge.

The Wall Street Journal calls Kurzweil “the restless genius” and Forbes calls him the “the ultimate thinking machine.” In 1999, he received the National Medal of Technology, and in 2002, he was inducted into the National Inventors Hall of Fame. Since 2012, Ray Kurzweil has been the Director of Engineering at Google working on machine intelligence and natural language understanding.

“You need to start your project before it’s feasible. Being in the right place at the right time is critical.”

Kurzweil’s advice for the visionaries and inventors in the room? “You need to start your project before it’s feasible. Being in the right place at the right time is critical,” he said. “I realized that back in 1981, starting out with the common wisdom that while I couldn’t predict the future, perhaps, as an engineer, with the right data, maybe I could make some educated guesses.”

Not everything is predictable, but the price performance of information technology, computing, is perfectly predictable – a smooth trajectory that is exponential, not linear – simplifying one variable when thinking about the future, Kurzweil said. Our brains see the future as linear, as flat progression. Exponential growth starts off the same as geometric growth, appearing flat until it reaches “that knee in the curve” at which point it rises vertically by doubling at regular points in time.

The result is innovation that’s getting faster and better every year. Take for example the computer chip: the smartphones we hold in our hands today are a 1000 times stronger than the computers we used in the 1980s. Indeed, Kurzweil predicted that exponential growth in computers and technology will change the world and our role in that world.

IBM’s Watson computer is just one example of how this change is already happening, as the pace of technology’s progress outpaces human ability to process and comprehend it. According to Kurzweil, that point in history is 2045. At that point, machine intelligence will be infinitely more powerful than all human brains combined.

What does the world look like? Technology will be part of the human body. We are already experiencing this to some degree. Our smartphones are constantly connected to us, making technology an extension of our bodies, with data will be implanted into our brains as nano-chips.

Kurzweil touched on transhumanism ever so briefly towards the end of his talk. It is a belief that technology will replace what biologically makes us human. The biological human will become obsolete, giving rise to the machine-like superhuman. Kurzweil prophecied a cyborg world where humans have advanced cognitive capacities, limited deficiencies, and believes we’ll be better for it.

Meena Sandhu is a marketing strategist and a speaker. She heads up Moonshot Marketing. Meena is currently working with a number of clients in the startup, fintech, and agency worlds. She is an adjunct professor at UBC at the Graduate School of Journalism and the Sauder School of Business. Meena lead the acquisition strategy for Credit Unions of BC. She was responsible for leading ING DIRECT's regional marketing strategy for Western Canada. Meena is well recognized in the social media community in Vancouver and hosted Social Media Week in 2011 and 2012 as well as presenting as a speaker and moderator each year. Meena joined the BCAMA board of Directors in 2012 as the Director of Social Media and in 2014 as the Director of Vision. She has been doing public speaking across North America since 2009.