On-demand marketplaces have been experiencing a dramatic shift as entrepreneurs disrupt traditional markets. Simply put, startups are changing a broad cross-section of traditional industries — for example, Airbnb in hospitality, SHOES.COM in footwear and apparel, Instacart in groceries, Uber in ride sharing, Coinbase in financial services, and now, GoFetch in pets services.

This trend is not slowing down. In 2015, the on-demand economy attracted more than 22.4 million consumers and $57.6 billion in spending — in addition to $6.5 billion in funding led by firms such as Andreessen Horowitz, General Catalyst, Redpoint Ventures, Hardy Capital, and Kleiner Perkins.

As a founder, your number one job is to build and lead a team. However, in the world of on-demand marketplaces, you’re presented with an entirely new set of challenges.

If you have been following the GoFetch story from the start, you would know that the largest challenge my co-founder, Paul Ratchford, and I have faced would be managing, growing, and listening to both sides of the market. I am talking about the consumers on one side, and gig-workers or small business on the other. As we have seen, this relationship could be between riders and drives (Uber), travellers and hosts (Airbnb), buyers and sellers (Amazon), and so on.

When Paul and I set out to do our seed round we saw incredible investor appetite; however, we also experienced thought provoking questions during investors meetings and pitches on how we planned to address the challenges that building and growing an on-demand marketplace involves.

Some venture capitalists we met with argued that there will not be an on-demand service/product such as Uber in every vertical of tradition commerce. However, just today, I had a fruitful phone conversation with a VC that has backed the likes of Snapchat, Warby Parker, and Airbnb. He mentioned our timing could not be better as the first team of entrepreneurs who figures out this so-called “chicken and egg” conflict in our industry will be able to scale their marketplace into a large, market-leading juggernaut to be acquired or IPO.

We spent days and nights, with numerous Starbucks runs and heaps of McKinsey reports, aiming to build a marketplace that makes it easier than ever for North American pet owners to connect with people looking to monetize their free time or supplement their own business.

We found that even though each side of the GoFetch marketplace has different needs, they are also fully dependent on each other. This was a driving force towards our effort of developing and preserving stickiness and keeping the entire transaction “online”; from discovery, to scheduling, to peer-to-peer communication, to payment – all on the GoFetch platform.

If you’re either an entrepreneur or investor testing the waters of the on-demand space, I urge you to jump in headfirst.

As we aimed to shake up the traditional way North Americans get their dogs walked and find a sitter, the VC environment for tech startups like ours was and continues to go through unpredictable ebbs and flows.  There has been an astronomical rise in the number of seed and angel funding across on-demand marketplaces, so we hit the road thoughtful about who we wanted to raise capital from.

We picked multiple firms and angels we wanted to set up meetings with. We were working out of my basement at the time GoFetch hit the App Store, and needed to raise quick as we had two to four months runway with overwhelming user-growth.

The round started with coffee meetings and pitches everywhere, from country clubs, Las Vegas sports-books, and ecommerce CEO’s board rooms. With this came an educational experience that felt like getting a law, finance, MBA, and psychology degree all in one. We found out really quick that the most important part of all fundraising is finding the right investors to finance your company who will also bring a level of mentorship, experience, and guidance to your business.

Soon into the process, we were in discussions with two of the most seasoned and high-integrity investors an entrepreneur could ask for – William Sauder and Roger Hardy – both of whom we had previous relationships with from the Vancouver business community.

We all shared the vision of building out a one of Canada’s first on-demand marketplaces, and the round came together seamlessly – oversubscribed, valuing the company at over $2 million.

The exciting thing about building a marketplace and raising venture capital is that there is no set way of doing it.  There are a lot of data points entrepreneurs and investors can look at, but without bending the boundaries of what can be done in your specific industry, it is very challenging to develop firm opinions and strategies about how to build something meaningful.

If you’re either an entrepreneur or investor testing the waters of the on-demand space, I urge you to jump in headfirst. Like all major disruptions, on-demand marketplace startups are challenging industry incumbents with new business models and ways of engaging customers. Existing companies will need to embrace the on-demand economy and transform their services to meet consumer demand, or find themselves disrupted by those who do embrace this shift. In a world where time is becoming more valuable than money, firms that serve their customers quickly, securely, and seamlessly, with be the real winners. 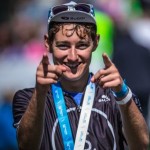 I am an entrepreneur. I love to read and run triathlons.