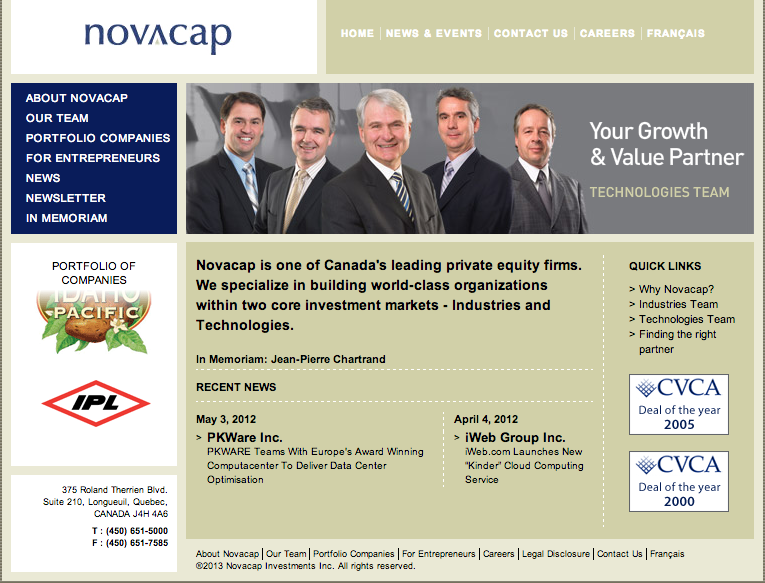 Longueuil, Québec-based Novacap, one of Canada’s oldest private equity firms, has announced that it has secured $250 million or a first close towards its fourth technology fund.

Novacap is split into two areas:  Novacap Industries invests in middle market companies within traditional industries, while Novacap Technologies, the side that raised the $250 million, invests in in companies focusing on growth and market leadership in the Information and Communication Technologies sector.

The new fund, called “Novacap TMT IV LP” will likely be around $350 million according to PE Hub. The firm’s previous fund was valued at at $180 million in 2007.

“Fund-raising has, of course, been tough, but we have found it easier this time to sell our value proposition,” Novacap Technologies president Pascal Tremblay told PE Hub. “Investors these days understand and appreciate our technology focus, and recognize our company-building practices. They know that Novacap has been doing this for 33 years, and that we plan to be here for another 33 years.”

The new funds are coming from a variety of institutional investors and fund-of-funds from the US, Canada and Europe, as well as high net-worth individuals. Apparently US-based fund-of-fund were attracted to Novacap, accoring to Tremblay, because of “Novacap’s long-standing track record of acquiring mid-market businesses in established technology, media and telecommunications sectors.”

The firm achieved some notable exits with their last fund, including in October when Novacap and Desjardins Capital de risque sold Creaform, a manufacturer of portable 3D optical devices, to Ametek for US$120 million. In November, the firm sold Montreal-based hosting and cloud provider iWeb to Internap for US$145 million. These exits helped Novacap Technologies return a sizeable chunk of Fund III capital to LPs in just the last few months.

PE Hub mentioned that Tremblay is not planning any change in investment strategy with Fund IV. Novacap will continue to make majority investments, usually within a range of $25 million per company. It will also stay focused on deal-making in Canadian technology hubs, though the firm is prepared to invest abroad where it finds “replicas of its existing investment thesis.”

FuckUp Nights Toronto is celebrating the one-year anniversary of its speaker series on March 15 at The Concert Hall, where it’s bringing a lineup…