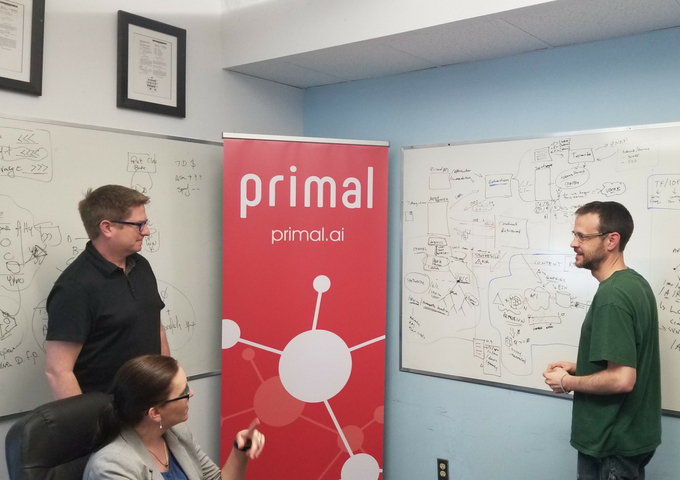 Primal plans to use the funding to build new applications and pursue strategic partners, sign licensing deals, and invest in sales and marketing.

For social media managers, Primal can make recommendations on content that aligns with a brand’s personality, while publishers can better learn the interests of their readers and create and share content based on that insight.

“We under-finance startups and have them focus only on creating short-term revenue at the expense of building a sustainable and valuable business.”
– Primal CEO Yvan Couture on Canada’s IP challenge.

Primal said that it doesn’t require large amounts of training data to understand meaning, which allows it to address smaller data environments. The platform breaks down textual objects such as a post or tweet to find other related content and synthesizes the meaning of each word to determine the message being expressed in the original content.

In a blog post, the company gives the example of the word firetruck; as separate words, fire could mean emergency and burning, or marshmallows and coziness. Put simply, Primal can analyze the word in the context of entire article, and recommend articles with the same meaning in real time.

“AI is not about replacing humans, but about making humans smarter, better, faster,” said Yvan Couture, president and CEO of Primal.

The company said that it has previously raised $25 million from angel investors solely to invest in research and development, and has built international AI patent portfolios with 148 patents. Canadian startups’ poor patents performance is well-known, as companies struggle to secure the patents that would help them get value out of their intellectual property. The federal government has even stepped in to tackle this with its IP Strategy, which aims to increase literacy and support startups and remove potential barriers.

Couture told BetaKit that Canada’s IP challenge is “self-inflicted,” and that Primal made patents a focus early on, even at the expense of other aspects of the business. As a company working in the AI space – which is foundational for powering other applications – Couture said that Primal is particularly at risk of having their technology copied.

“We under-finance startups and have them focus only on creating short-term revenue at the expense of building a sustainable and valuable business,” Couture said of Canada’s IP challenge. “It is easy to generate early revenue. The challenge is building solid long-term revenues and defend your position. IP helps provide that significant defence. Not having IP does not affect early commercialization, but it does affect long-term sustainability and value, especially in the AI space.”

Jeff McDowell, COO of Primal, said that the company’s ability to understand interests so specifically meant that publishing was a natural industry to tackle for now. The plan is to expand in several ways, including an integration with an unspecified but “well-known” ecommerce platform, with the goal of helping smaller retailers compete with giants like Amazon that have terabytes of data to provide highly-relevant recommended products to customers.

Primal is also focused on building an enterprise search offering.

“Typical statistical methods don’t work for enterprise search as there simply isn’t enough activity to support statistical models of relevance,” McDowell said. “So search appliances more often than not default to keyword search and relevance suffers. Primal can solve this using semantic models that build relevance to the user based on their activity, job description, postings, and documents they have saved in an enterprise file store. We believe this line of product will be transformational to the enterprise.”