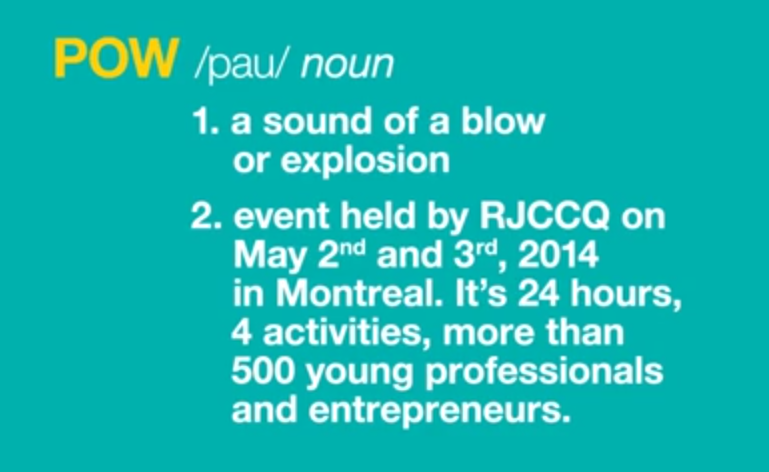 POW 2014 is just a month away. It’s a huge event put on by the RJCCQ, Quebec’s Le Regroupement des jeunes chambres de commerce du Québec (roughly, the Coalition of Youth Chambers of Commerce of Quebec). The event will bring together 500 young entrepreneurs and professionals to take part in one of four activities over 24 hours.

The event happens May 2-3 at Notman House in Montreal, as well as the Caisse de dépôt et placement du Québec (Quebec’s pension fund, which is also located in downtown Montreal).

The four activity streams that participants can choose to join will be “Startup 24H”, “Missions”, “Case Study” and “Mashup,” an event reserved for entrepreneurs.

“Startup 24H” is like an extension of the popular Startup Weekend events, giving participants 24 hours to work on their idea and eventually pitch it to a jury for cash prizes and services. “Missions” is inspired by the television shows like “The Apprentice”, where participants will be given five entrepreneurial missions. “Case Study” involves three case studies that the POW team have made up, based on real challenges that it has faced. In less than 24 hours, each multidisciplinary team formed during a “draft night” (much like a pro sports draft), will have to work on solutions and submit them to a jury.

Finally, “Mashup” is divided into three phases: Business Meetings, where participants get to create their own meetings schedule targeting various potential partners, clients and clients. Open Forum is the place where participating entrepreneurs will share their expertise, knowledge, business objectives or any other message with fellow entrepreneurs. The ideas are grouped by themes which then form different “discussions zones”. And finally, the Mashup itself is where 10 young entrepreneurs will present 10 innovative ideas to a rep from the City of Montreal, who could offer them a contact. The rep will be Harout Chitilian, Vice-Chair of the Montreal Executive Committee responsible for administrative reform, youth, digital smart city and information technology. The winning idea may be considered for the ”Montreal’s Digital and Smart City 2014 Strategy”.

“Basically what we’re trying to do is a more funky version of a conference. Different young professionals and business people who want to meet people and want to increase their network will come and they can choose one of four activity paths that they want to do,” said POW 2014’s Émilie Véronneau. “We’ve already sold 50 percent of the tickets, so it’s going to be a big get-together.”

She said she’s most excited for Startup 24H, where the startups have 24 hours to develop an idea into a viable business plan. Prior to attending a Startup Weekend in Montreal, she told us she wasn’t too familiar with the startup world, but came away impressed. “There’s so many startups that have great ideas and that’s what interests me the most,” said Véronneau. “They’re all very creative and for me it’s the part that’s more challenging- you have just 24 hours to finish your idea and pitch the project.”

For those interested in tickets, a two-day pass runs for $120 plus tax while a one-day ticket goes for $80 plus tax. Check it out here.