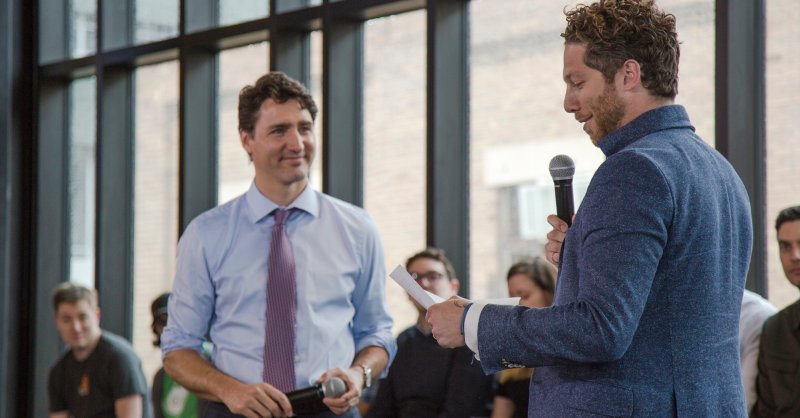 When asked about protectionist policies – particularly those stemming from US President Donald Trump’s administration – and their potential effects on Canadian tech companies, Trudeau said that the Canada-US relationship is bigger than any one trade irritant. He emphasized that Canada has a deeply interconnected economic relationship with the US, which is crucial to both Canada and the US’s tech ecosystem.

“Standing up for Canada’s interests is what my job is, whether it’s softwood or software,” said Trudeau, alluding to Trump’s proposed 20 percent tariff on Canadian softwood. “What we have to know is we are tremendously interconnected in our economy with that of the United States, but it’s not just a one-way relationship.”

Responding to @michaellitt's question on #NAFTA, @JustinTrudeau says "Standing up for Canada is my job, whether it's softwood or software" pic.twitter.com/W1hBboZUWf

Trudeau also noted that while the two countries may have political issues that act as irritants to their relationship, having a good, constructive working relationship allows them to work well together and benefit from each other.

“Canada’s tech industry is doing great because of the connections to Silicon Valley, and I know that Canada is providing extra value and advantages to Silicon Valley and its diversity, its thinking, and its graduates,” said Trudeau. “There is always going to be…far more things that keep us working together than those sort of narrow interests.”

“The Global Skills Strategy, that’s about companies being able to bring in a handful of their top talent from around the world who will then start up an office or a research facility or hire a lot of Canadians facility,” said Trudeau. “That’s a way of increasing our skill levels here in Canada and…just generally looking to draw in the best and brightest from around the world through an open immigration strategy.”

When asked about how Canada can actually keep talent in the country and deter people from moving to places like Silicon Valley to work for major startups, Trudeau said that he wants companies to see Canada as a place where they can grow and succeed on the global stage. At the same time, he believes that Canadians shouldn’t be stopped from going overseas, travelling, or having different experiences when they want to build something great.

PM Trudeau takes part in a tour and Q&A with @vidyard co-founder and CEO, @michaellitt, in Kitchener, Ontario. pic.twitter.com/DH15mN24uC

“I want people to be able to choose Canada and know that if they do choose to build, to support, we will be there to support them,” said Trudeau. “There is a great ecosystem that they can draw on for employees, for growth, for capital…that’s sort of the goal I think we should have. I know that Canada can compete and succeed against any community, any country in the world. All people are looking for is an opportunity to demonstrate that.”

When asked about how Canada will keep up with the automation of jobs, Trudeau pointed to budget 2017 and how it is focusing on skills and infrastructure training to prepare Canadians from all walks of life for a changing workforce.

“What we’ve done is we’ve set in place a broad range, sort of a suite of approaches, for different people. Are you still working but want to go back to school part-time? Can we help you with that?” said Trudeau. “The world is changing so fast, we need people to be going back to school. There’s a whole range of things where we know that investing in Canadians, investing in our capacity to learn, to innovate, to create, to shift, to become better, to become more technologically apt…is going to be really really important.”

“The Bradley” watch is coming to Canada. The watch can’t really be described as a “smart” watch in modern terms, but it effectively allows…