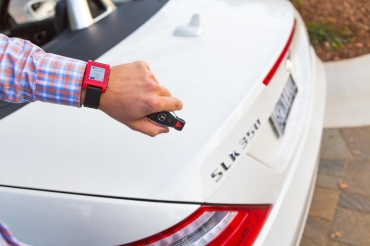 At CES 2014 this week Mercedes-Benz unveiled a smartwatch that can be used with several car models from the auto-maker. Drivers can use the smartwatch, designed and manufactured by former University of Waterloo grads Pebble, to check on fuel level, location and door lock status.

The Pebble smartwatch connects seamlessly to your iOS or Android device using Bluetooth technology, and alerts you of incoming calls, emails, and text messages. There are also over 1,000 Internet-connected apps available for download including customizable watchfaces, fitness apps and music. Cofounder and former University of Waterloo student Eric Migicovsky entered the VeloCity “dormcubator” program for its inaugural term in the fall of 2008, and developed the inPulse watch for BlackBerry as a fourth-year project. Then the company was called Allerta where Migicovsky and company spent some time at the Communitech Hub followed by the Y Combinator accelerator program in Silicon Valley. It was there that his team developed the Pebble smartwatch.

The deal with Mercedes Benz is quite cool. The new smartwatch will act as a second screen for drivers’ smartphones, which should be equipped with the Mercedes’ Digital DriveStyle app. When the driver is away from his/her vehicle, the smartwatch can reveal a host of diagnostic information related to the present status of the car. Plans to offer smartwatch technology had been rumoured around Mercedes Benz, although its more hardcore fans didn’t know to which extent.

“Pebble Technology was initially contacted to work on this project, as Mercedes-Benz was confident of their project handling capability,” wrote the Auto-Types.com blog. “However, as the project progressed, this changed into a viable partnership, which could be used for large projects in the near future. Insiders at Mercedes-Benz say that Pebble’s new smart watch will portray their ability to work on remote control technology, which has been under development at Mercedes-Benz’ Silicon Valley lab.”

Smartwatch technology is still very new in the automotive industry and it seems like Mercedes-Benz is one of the trail blazers.

Mercedes-Benz announced its Pebble smart watch right after Nissan launched its Nismo smart watch early last year. According to Auto-Types, Nissan was focused on “portraying performance data carried forward from its Nismo models and displaying them, whereas, Mercedes Benz planned a complete approach by providing general data, such as oil level and engine temperature, etc.”