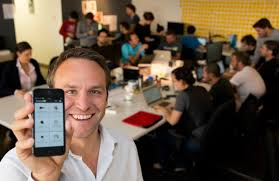 PasswordBox CEO Dan Robichaud told me over the phone that this morning’s acquisition news involving San Francisco-based Legacy Locker was a cash and stocks deal that left both sides extremely happy.

And it wasn’t just the Montreal company trying to acquire a semi-competitior, but rather to begin making their presence known in the startup epicentre of Silicon Valley.

He’s adamant that this company, now his sixth startup, will be a great Canadian success story. The plan has never been for an big sell-out. “I’m trying to build something really big,” Robichaud told me. The story continues with PasswordBox’s first foreign office opening.

Legacy Locker, lead by Montrealer Jeremy Toeman, is the “first-to-market digital legacy solution” that acts as a safe, secure repository for digital property, useful for when users pass away. It lets users grant access to online assets for friends and loved ones in the event of loss, death, or disability.

It’ll likely turn out to be one of PasswordBox’s very few acquisitions, if not the only one.

“We can acquire some competitors but I don’t really see the value,” said Robichaud. “The main reason why we did this was to get our footprint in San Francisco, get Jeremy on board, get their user base (because they have an impressive user base) and also get their recognition. When you type digital legacy on google, they’re the first one to pop up.”

It worked out well for Legacy Locker too: the tool doesn’t provide too much daily value for users, but serves its value in scenarios involving sudden change. “We’re bringing the best of both worlds, where you have digital legacy management, but we also manage your digital life on a day-to-day basis,” said Robichaud.

With international plans set and $6 million in series A funding all wrapped up, things are looking up for Robichaud and his team. Since negotiating the acquisition he’s been jet-setting between Montreal and California, living the fast-life of a startup CEO carrying strong momentum. He says its like “living on a plane” for the past two weeks.

“Its crazy, man,” he said. “But its good: when people want to meet you and want to form partnerships with you, its nice. We built a product that people find useful and use multiple times a day, and for that reason I think we’re having some interest.”

(It’s true: although it personally took me forever to download the chrome extension, I do find myself using it everyday, particularly for multiple twitter account sign-ins).

Robichaud’s story is impressive. The serial entrepreneur sold his first company, Generation Flash, in 2006. He went on to exit his next four businesses before PasswordBox and also serves as a limited partner in two VC funds. Before his entrepreneurial days Robichaud was a radio show host where he pioneered RSS audio podcasting. To say he’s been “ahead of the curve” throughout his career might be accurate.

Studies indicate that over 50 percent of people are using the same username and password for every account, while it’s estimated that 90 percent of the usernames and passwords people create are easily hackable. PasswordBox solves that problem but allowing users to enter usernames and passwords, which are saved forever and automatically used via one-click login next time that site is visited. An extremely secure “master password”, never know by anyone other than the user, allows access the one’s library of passwords.

BetaKit at #SXSW: Bionym’s Karl Martin Shows Us The Nymi

Joseph Czikk chatted with Bionym cofounder Karl Martin at the #SXSW Interactive Festival in Austin, Texas. Czikk’s first question was why everyone in Canada…