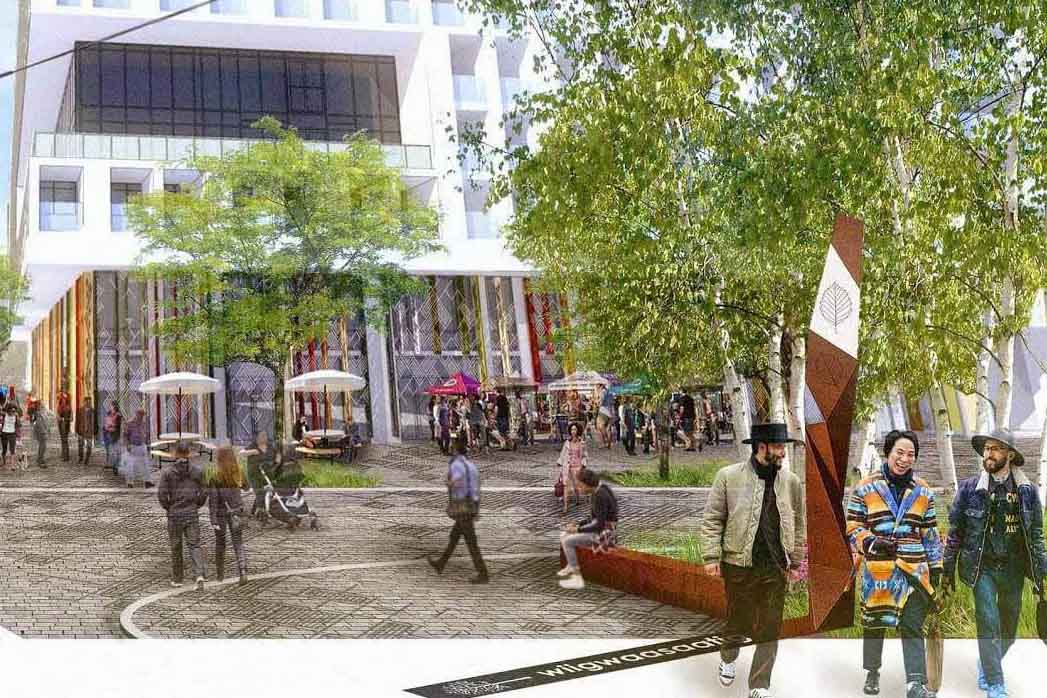 Toronto’s Indigenous Centre for Innovation and Entrepreneurship (ICIE) is now expected to open in 2022, following delays related to the COVID-19 pandemic and a floorspace expansion to 22,000 square feet. The Centre was originally scheduled to open by the end of 2020.

“The Indigenous Centre for Innovation and Entrepreneurship will be Indigenous-led, and with a predominant Indigenous board.”

A City of Toronto project designed with input from the local Indigenous community, the ICIE will be located on City-owned space at 200 Dundas Street East. The Centre hopes to provide opportunities for the local Indigenous community to explore entrepreneurial aspirations by providing business programming, advisory services, mentorship support, shared co-workspace, community event space, and connections to business networks.

Consultations on the ICIE began in 2018, and, in 2019, an interim ICIE Leadership Advisory Circle was established to support the City in the development of the Centre.

Toronto Centre city councillor Kristyn Wong-Tam told BetaKit the ICIE has been delayed for three reasons. As the City prioritized a pandemic response, a number of City-led projects were postponed or delayed as staff was allocated to the emergency. Aside from COVID-19 delays, the addition of a third floor and 10,000 square feet of project space led to the architectural firm tasked with the ICIE failing to meet expected deadlines, including a delay in the tender process.

Despite the delays, plans for the ICIE moved forward with a new goal to open by 2022. Last year, in consultation with the local Indigenous community, a governance structure for the ICIE was established, while the City also hired a project manager, Michele Baptiste, in September.

Baptiste joins the City after serving as the manager of Indigenous relations with Express Scripts Canada, and as vice president of business development and training with Red Wolf Mediation and ADR Services.

“The ICIE is an important City project under the auspices of the Indigenous Affairs Office with technical support from the Economic Development and Culture division with staff actively engaged in the ICIE development with the local Indigenous community since 2018,” Baptiste told BetaKit.

Initial conversations on the prospect of an ICIE-style project began in 2011, when Wong-Tam was serving as councillor for what was then Ward 27. Originally floated as an Indigenous cultural and business district in the east part of downtown Toronto, dialogue with Indigenous entrepreneurs highlighted the need for a specific space to conduct business.

“I was recognizing that, number one, we have a sizable number of Indigenous organizations that were clustered around the downtown east of the area, and I also recognized that with all those social agencies that were located in the ward, not too many of them focus on business or entrepreneurship,” said Wong-Tam. “And as someone who actually is an entrepreneur, I thought one of the ways that we can help uplift people is to try to find a pathway to either promoting and/or creating your own small business.”

The Centre will be controlled by a non-profit board, which is currently in the process of being incorporated, with support from the City. Members are set to be recruited to the board this year.

“The Indigenous Centre for Innovation and Entrepreneurship will be Indigenous-led, and with a predominant Indigenous board,” said Wong-Tam. “And it will be mandated to deliver programming to support Indigenous entrepreneurship and to foster innovation. As long as the mandate is really clear, I think that everyone can work to a good outcome.”

In addition to managing the Centre, Wong-Tam expressed hope the board can eventually offer microloans or larger seed capital through the development of a bank.

The ICIE will be located on City-owned space at 200 Dundas Street East.

In 2019, FedDev Ontario, the federal government agency tasked with fostering innovation and business growth in Southern Ontario, committed up to $5 million to the ICIE project. According to Wong-Tam, the City has committed an additional $5 million towards operating expenses, will outfit the space, and plans to establish lease conditions with the ICIE’s eventual board of directors that she said will be below market value.

As of 2019, the Indigenous population in Toronto was estimated at 70,000, according to data from agencies serving the Indigenous community in the city. Export Development Canada (EDC) estimates there are more than 50,000 Indigenous-owned companies in the country. Comprising three groups, First Nations, Métis and Inuit, EDC states that Indigenous-owned businesses contribute over $30 billion annually to the Canadian economy.

In a blog post on the EDC website, Todd Evans, the national lead for Indigenous exporters at EDC, noted that access to working capital and resources are two key challenges facing Indigenous businesses in Canada. Other challenges facing the country’s Indigenous population include the tragic legacies of the residential school system and the Sixties Scoop, referred to as a cultural genocide by the Truth and Reconciliation Commission of Canada, institutional and systemic racism, and socioeconomic factors, including access to technology.

Increasing Indigenous representation in the technology sector is a stated focus of many of the organizations that have consulted on the ICIE. In 2019, the Face of Leadership tech report by Minerva BC highlighted that zero people who identified as Indigenous served on boards or in executive roles among the British Columbia-based tech companies surveyed. A January 2019 report from the Brookfield Institute also noted that only 1.2 percent of Canadian tech workers identified as Indigenous.

“We do see a lot of our Indigenous people doing great work in the fields of education and health.”

Jarret Leaman, a partner with software and blockchain startup Akawe Technologies, who consulted on the ICIE, told BetaKit that Indigenous communities across Canada have been forced to prioritize other pressing issues, including access to clean drinking water, over considerations like access to technology.

The Canadian Council for Aboriginal Business (CCAB), a 1,200-member organization and another group that consulted on the ICIE, released a report in 2019 stating, among other things, that “the future of Indigenous employment and community economic development depends on the joint efforts of industry, government, and Indigenous communities to develop relevant and impactful education and skills-training programs for Indigenous Peoples in STEM disciplines.”

The CCAB lists its mandate as helping to establish bridges between Aboriginal and non-Aboriginal peoples, businesses and communities. In December, it received $500,000 from Facebook Canada, designed to establish an Indigenous business support fund, along with access to skills training and a membership program.

Paul-Emile McNab, the director of business development and strategic initiatives with the CCAB, called the ICIE essential to fostering opportunities for Indigenous entrepreneurs in Toronto. He pointed to opportunities to network and grow businesses, and was hopeful when it comes to Indigenous representation in tech.

“I’m really encouraged by the potential in the tech sector,” said McNab. “I think, in general, the tech sector just wasn’t engaged much with Indigenous businesses for a long time, but I think that’s changed now. I think it’s going to take some time, but I feel there’s a lot of optimism there.”

“The question I have for the tech sector is how close are we to replicating programs in a different way that were started in the same mindset as the residential school and learning program,” said Leaman. “In regards to technical accelerators, the question is going to be: who is bringing the collective consciousness of Indigenous relations to the tech sector to understand how we’re rolling out programs to increase Indigenous representation that is understanding and incorporating the learnings of previous social policy blunders that have happened to program development in the past?”

For Wong-Tam, the ICIE presents an opportunity to address some of the Truth and Reconciliation Commission of Canada’s 94 Calls to Action and learn from the Indigenous community on what entrepreneurship looks like from an Indigenous context.

“The capitalist system that we live in has created some really dire consequences where a small number of people amass an incredible amount of wealth that they’ll never be able to spend in their lifetime. And there are too many people left behind,” said Wong-Tam. “This, to me, is very personal and why this has to be done.”

Montreal-based Local Logic, one of the latest pitches on The Disruptors, wants to help homebuyers, consumers, and travellers make more informed decisions when choosing…