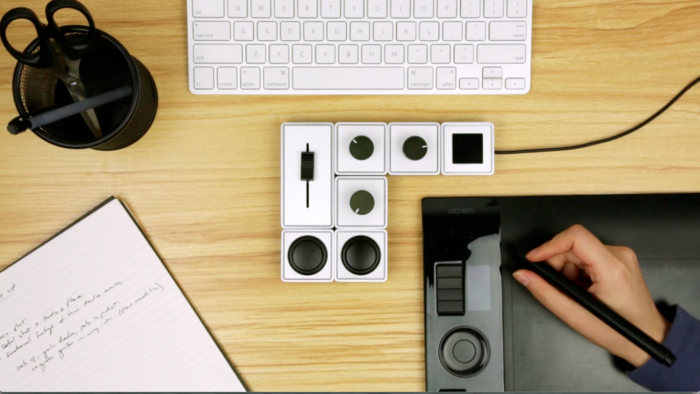 Having already raised $77,000 of a $100,000 Kickstarter target, and still with 31 days left to go, University of Waterloo students Ashish Bidadi and Calvin Chu are all but assuring they’re going to be successful. It’s fair to assume that the Palette freeform hardware interface product will go all the way.

Palette is the first freeform hardware interface that offers hands-on control of your favorite software, and it most appeals to creative professionals using software programs to alter their work.

“We’re planning to hit more than $100,000 and we really think we can do it,” Bidadi told BetaKit. “The first audience we want to focus on are the creative professionals- DJs, film editors, photographers, all of these people who use applications that have a lot of repetitive work and they’re constrained to a one-size fits all keyboard and mouse.”

Chu is the hardware designer while Bidadi is coding all the software for the Pallete. The pair met each other while studying at the University of Waterloo’s mechatronics program. Palette was Chu’s thesis project and he graduated earlier this year. Since June they’ve been working on the product full-time and for the last three months they took part in the three-month HAXLR8R accelerator program in Shenzhen, China, the “Electronics Capital of the World”. The move ensures that the pair found the right manufacturing connections, and once the Kickstarter mission finishes in early January, the Palettes will be ready to ship for the planned date of June 2014.

So what was it like spending three months accelerating the product in a busy Chinese city?

“Man, it was amazing. It was hectic but we were surrounded by some very smart people,” said Bidadi. “They accept about 10 companies and you spend three months developing your product, talking to manufacturers, talking to suppliers and the idea is that you’re able to launch your product and you’ve got manufacturers and suppliers lined up.”

And that they do. The product itself empowers people to build a physical interface customized to their personal needs. It’s a hardware platform made up of a variety of modules. Each module has a single physical input, like a button, dial or a slider. Users snap together modules like Lego and no coding or soldering is required. Typical programs that it can be used for include Adobe Lightroom, Photoshop, DJ software such as Traktor and Abelton, any application that already supports keyboard shortcuts, like Spotify and Skype, and even games like Starcraft.

“With Palette you can have a tool that is personalized, increasing your experience and productivity,” reads the Kickstarter page.

Everyone from Techcrunch to Fast Company to the Wall Street Journal has featured the product. They’ve even received media coverage from the UK, Poland and Spain. Currently Chu and Bidadi are in San Francisco pitching investors as part of the HAXLR8R program.

On the one-size-fits-all method of keyboards and mouses, Bidadi is excited for creative professionals to finally gain more control. “They don’t have that tactical ability that is so crucial to their work. So now with Palette you can arrange these modules in any way you want that fits your style and your work flow, and you can map these modules to whatever functionality that works for you.”