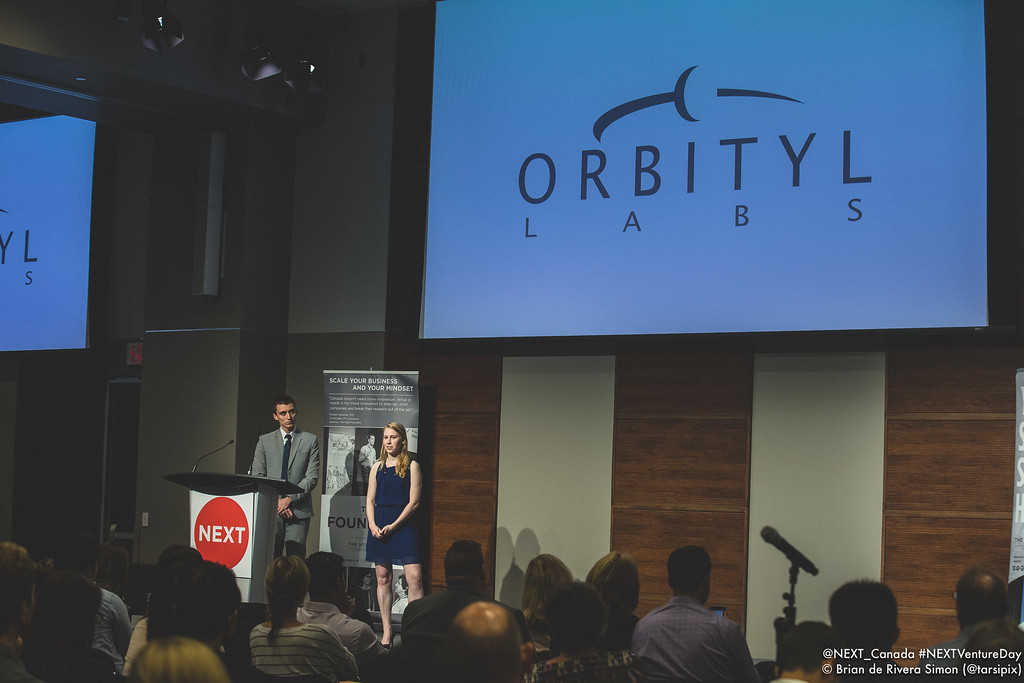 This morning, 12 of NEXT Canada‘s ventures pitched at the organization’s seventh annual venture day, which included an audience of over 250 investors, mentors, donors, and partners at the MaRS Discovery District in Toronto.

Venture Day celebrates the end of NEXT Canada’s two spring and summer programs: Next 36, which supports young founders of early stage businesses; and Next Founders, which focuses on founder development for existing startups with significant traction. Murad Al-Katib, president and CEO of AGT Food and Ingredients, kicked off the day with a keynote on how he grew his $2 billion food business out of Saskatchewan, while maintaining a focus as a social entrepreneur by giving back.

A few of the founders were also dedicated to making social impact a foundation of their companies; presenting companies Empty Cubicle, LevelJump, and Staffy are members of the Upside Foundation, which encourages startups to donate a portion of their equity to charity upon an exit.

“Part of what we’re trying to do is set expectations, and inspire them to keep building companies of great impact and of benefit to Canada and the world going forward,” said Jon French, director of marketing and communications at NEXT Canada.

NEXT Canada ended the day with an awards ceremony that recognizes strong ventures within the program; Next 36 startup Orbityl, which is developing an ear bud meant to help insomnia sufferers with custom sleep plans; and Next Founders startup LevelJump, which promises to help new salespeople make sales 30 percent faster, were awarded the Outstanding Venture prize in their respective programs.

“In seven short months, NEXT Canada has made me a more confident and competent entrepreneur,” said Kristina Pearkes, co-founder of Orbityl and new graduate from the Mechanical Engineering program at McGill University. “Starting a company is difficult and scary, especially if you don’t have a support network. The mentors, professors, and experts we’ve connected with through this program have guided and inspired us, and they’ve helped to put our company on a path to success.”

Other startups were recognized for their progress, with the alumni award being renamed in honour of Geoff Taber, a NEXT Canada supporter and Osler partner:

Venture Day for the first cohort of NextAI will be held on September 20, 2017, though the organization hosted a mid-program demo day showcasing select startups in July 2017.

“We’re focused on very early-stage, idea stage, pre-seed companies that can have global impact by leveraging artificial intelligence and machine learning,” French said. “It’s Canada’s time around artificial intelligence. With what’s been happening in Toronto, Montreal, Edmonton, and other parts the country, [they] have done such an incredible job for decades now on the research, the science, the academic side, and now with the startup world. Now is the time to start commercializing some of that great research and leveraging the academic strengths of the Canadian AI community.”

John Kelleher, co-chair of NEXT Canada, took an opportunity to reflect on the past seven years of the program. NEXT Canada, he says, has supported 300 founders and had over 400 business leaders involved in the program. Alumni ventures have raised a quarter of a billion, and 30 percent of its mentors have been women.

“I think the next seven years are going to be exceptional,” said Kelleher. “NEXT will have greater reach and relevance nationally and internationally. You’re going to see us double down and invest in our leading programs like NextAI, Next Founders, and Next 36. You’re going to see us launch a major capital campaign so that we have more resources. We can pursue excellence at a higher level, and at the end of the day, we’re going to get further behind the mission and drive this organization to another great S curve over the next five to seven years.”

On November 20-22, Devs Without Borders, in partnership with Free The Children, will host the Break Poverty Hackathon in Toronto. The event hopes to…