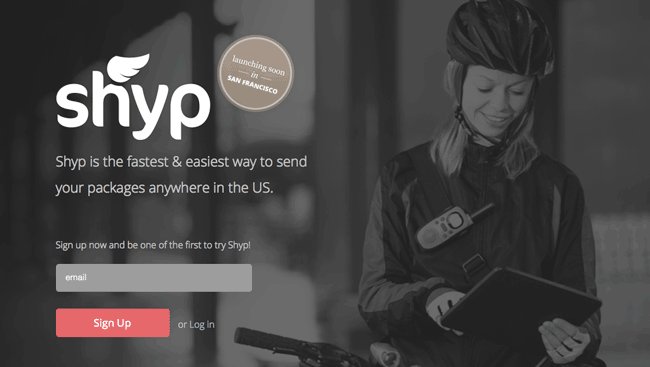 Shyp, a San Francisco-based startup headed up by Canadians Kevin Gibbon and Joshua Scott, has taken advantage of a recently changed SEC ruling on general solicitation in the US and raised $250,000 in 53 minutes on AngelList.

Shyp a new start-up aiming to simplify shipping anything, and the finishing touches to its $2.1 million round actually represented the first time that a company has taken advantage of the lightened solicitation restrictions. Previously, publicly advertising the fact that you were raising money was not allowed. Now companies can do this, but with a hieghtened responsibility to only accept money from accredited investors.

One of the investors was Tim Ferriss, a three-time New York Times bestselling author and prolific angel Investor who wrote a blog post about Shyp’s fundraising to his 1.4 million readers. The result was a quarter million dollars raised in under one hour.

But prior to the ruling a few days ago, there were restrictions as to where Ferriss could put his money.

“I’ve been fortunate to be involved with some great companies from the earliest stages, but even with exclusive access, I couldn’t put much ‘wood behind the arrow’–without a fund, I couldn’t put a lot of money behind each bet,” said Ferriss. ” Now, it’s a different game. I can leverage my network and audience to heavily back companies I believe in, such as Shyp, which is tackling a market worth hundreds of billions of dollars.”

Ferriss was an early-stage investor and advisor in companies including Twitter, Uber, Evernote, TaskRabbit, Facebook and Shopify.

Other investors in the company include David Marcus (president of Paypal);  Hunter Walk & Satya Patel (Homebrew) and Brian McClendon (founder of Google Earth).

Shyp is an iPhone app that represents the easiest way to ship stuff. It’s taking sign ups now and will launch first in San Francisco. A ‘Shyp Hero’ (a driver) will arrive at your home or office, take your unpacked item away to be packaged, then send it on its way via the optimal carrier (i.e., FedEx, UPS, etc.). Shyp automatically optimizes it for speed and cost and charges no more than Post Office prices, plus a $5 pickup fee for sending solo items. If you send more than one item, the company waives the $5 pickup fee.

“We don’t want you spending time packaging and waiting in line at the Post Office. Instead, just take a photo of the item that you want to send, enter the destination, and choose a pick-up time.”

Walk, another new investor in Shyp, said that “this is a market that hasn’t seen significant innovation in 3-4 decades. Shyp has the potential to disrupt the archaic process of sending an item and replace it with an experience that is both delightful and effortless.”

Shyp cofounders Gibbon and Scott met while working together at San Francisco startup Attachments.me. There they conceived the idea for Shyp. A third cofounder, Jack Smith, previously cofounded Vungle, which raised over $8.5 million. Gibbon and Smith were previously high-volume eBay power sellers and knew the pains of shipping firsthand.

Real Ventures announced today that it has added Canadian entrepreneur Marcel LeBrun as a venture partner. Co-founder of iMagicTV and Radian6, LeBrun was most…