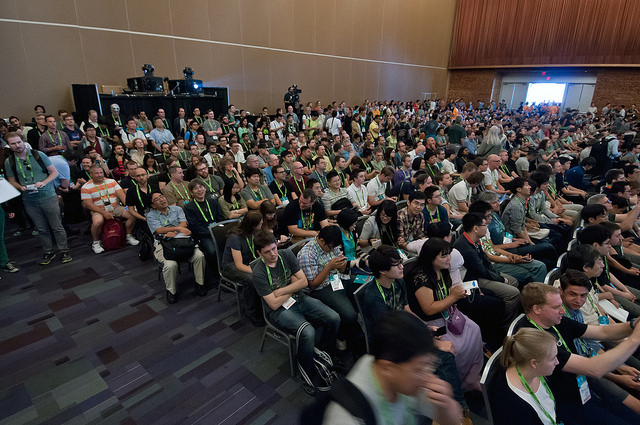 In his opening address Siggraph 2014, Dave Shreiner said “this event is all about technology to enhance peoples lives. But more importantly it’s also about compassion.” Being at conference that was putting people above the technology was a revelation. For the chairman, compassion is the narrative that matters.

He introduced everyone to Paulo Henrique Machado from Sao Paulo, Brazil. The computer animator attended Siggraph for the first time despite being confined to a bed and hooked to an artificial respirator 24 hours-a-day. Shreiner’s own iPad adorned Machado’s telepresence robot that allowed him to experience the people, the sights and the sounds in real time.

Machado shared with the SIGGRAPH team that the robot, “gives me the freedom that I physically can’t have.” Shreiner offered to the audience. “SIGGRAPH is a community. Paulo is part of our community, and we take care of our own.”

You can learn more about Machado from this BBC feature story.

The compassion theme was further amplified in keynote speaker Elliot Kotek. As chief of content and cofounder of Not Impossible Labs he’s a storyteller of the highest order. But he’s also a driving force behind a team whose core belief is that technology has to exist for the sake of humanity.

Read also: Not Impossible Mobilizes the International Maker Community to Save Lives

Kotek highlighted a number of projects the Not Impossible Labs team is currently tackling, as well as their commitment to a philosophy of shared innovation. He highlighted stories where open source platforms, hackers and do-it-yourself makers are fusing a community together and improving the lives of others with a mindset of “permission-less innovation.”

The genesis for Not Impossible Labs was the Eye-Writer project. For Tempt, a world renowned L.A graffiti artist fully paralyzed because of Lou Gehrig’s Disease (ALS), this amazing “hack” now allows him to draw and communicate using only his eyes. It worth watching Kotek’s partner Mick Ebeling’s TED talk.

Kotek spoke of Daniel despairing about his future and about being a burden to his family and village. By creating a 3D-printed prosthetic arm the impact of seeing Daniel simply feed himself for the first time in two years was massive. Project Daniel was born. Now in Sudan’s Nuba Mountains they have set-up what is likely the world’s first 3D-printing prosthetic lab and training facility.

The team’s goal was to teach and empower the local community to use this technology and help the too many victims of similar tragedies. Kotek credits Richard Van As for making the  prosthetic hand an open source file. At a cost of about $100 in materials, the needed hardware a little teaching time with people whose education is the equivalent to about the 4th to 6th grade learned in fours days the process to make these prosthetic arms. He pointed out that this is “proof of a process transcending the tech savvy. Most importantly the project lives on!”

Even with an exhibit hall overflowing with the technology that’s driving the visual brilliance we’ve come the enjoy from our games, movies, and animation, as Shreiner later shared with me, “for the Paulo’s, the Tempt’s and the Daniel’s of our world, this is what it’s all about, we make these marvellous things so we should be using them for good.”

There was no shortage of inspiration at Siggraph 2014. Seeing the very tangible results by fusing compassion with technology will hopefully be a catalyst to transcend inspiration into mobilization.My imagination goes into overdrive thinking about what this collection of exceptionally talented people will do in creating an even richer human experience.