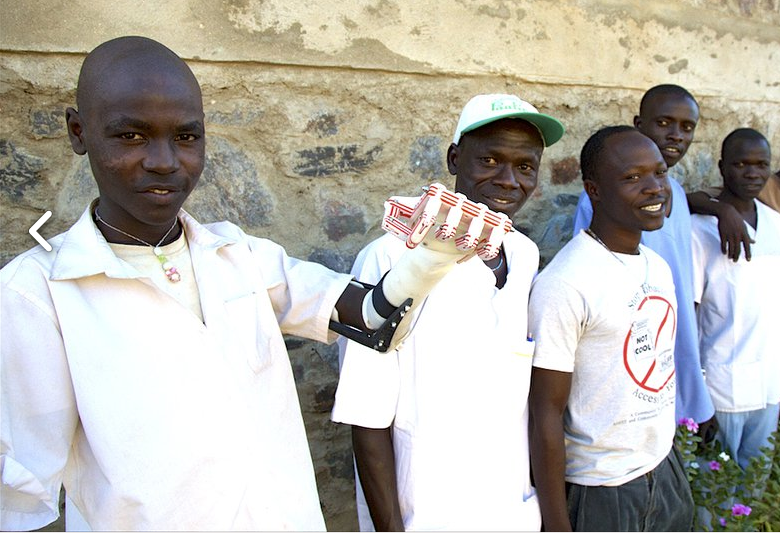 The most inspiring talk that I watched at NXNE Interactive 2014 was the first person to step on stage: Elliot Kotek, the cofounder of Not Impossible.

Not Impossible, as its name suggests, goes around the world and finds individuals who have lost the use of one or more of their body parts or functions. It could be teenagers living with perpetual civil war and bombings in South Sudan, a renowned graffiti artist left without the use of his body after Lou Gehrig’s disease struck or even a blind person who desires to know more about his surroundings.

There was nothing cheesy about this Los Angeles-based startup/ non-profit, and those who loosely throw around the term “I’m going to change the world” should probably see what these guys are doing first.

By collaborating with a growing community of creative makers and hackers, Not Impossible utilizes crowd-sourcing to crowd-solve previously insurmountable healthcare issues. It aims to directly change lives around the globe via low-cost solutions on an open-source, DIY platform. It’s “technology for the sake of humanity”.

They started with nothing, trying to undertake meaningful work for individuals, while putting all their money on credit cards. Along the way they hoped that brands would “join them in their journey.” Today many brands have, including Intel, Precipart, National Geographic and WPP.

After 10 minutes worth of Kotek’s talk I realized that he was filling in for Ebeling, who was apparently the real star of the show. Still, Kotek described all the amazing things that the organization is doing.

Most significant was the story of Project Daniel, or more specifically, a 14-year-old boy living in the South Sudan’s Nuba Mountains, the area that’s experienced conflict since 1983. South Sudan’s president Bashir is an indicted war criminal, the only one in the world currently ruling a country.

Ebeling read about the story of Daniel in a TIME Magazine article, about a doctor from New York living in the Nuba mountains, caring for an area of about a million people. Particularly, Ebeling saw that “Dr. Tom” had been forced to perform a double-amputation on a young man who lost two of his arms to a bomb while tending a flock of goats. This was Daniel.

Ebeling brought together 3D printing experts, physical therapists, engineers from Preciparts and a few filmmakers. Ebeling went down to South Sudan and set up what is probably the world’s first 3D-printing prosthetic lab and training facility and outfitted Daniel with a “robo-arm”. Even more inspiring, Ebeling actually taught some of the locals (most of which never finish high school, let alone middle school) how to create more of these for estimated 50,000 amputees who live in these conditions.

TIME Magazine said of the project at CES 2014 that “it’s hard to imagine any other device here doing more to make the world a better place.” Four arms have now been created for individual’s in Daniel’s area. Now the team is planning trips back to South Sudan, as well as South America, Nicaragua, and Haiti.

Just as inspiring was the help that Not Impossible gave to a graffiti artist in Los Angeles named Tim (aka Tempt) who was diagnosed with ALS (Lou Gehrig’s disease) at a young age. It’s a well-known neurodegenerative disease that rapidly renders the body useless due to muscle atrophy, difficulty in speaking (dysarthria), swallowing (dysphagia), and breathing (dyspnea). The mind, of course, continues to work, which is where Not Impossible started.

The organization created the “Mindwriter” which is a next-generation device that reads basic brain waves (EEG) to engage and disengage a computer mouse, allowing the user to draw using only their thoughts. That’s being led by a researcher in London, Ontario, Javed Gangjee. Inspired by combing the simplicity and functionality of The EyeWriter , with the intelligence of devices like OpenBCI, the BrainWriter will enable graffiti artist Tempt to continue to draw as his disease progresses. The BrainWriter will be featured alongside Google Glass in the International Digital Revolution Exhibit at The Barbican in June 2014.

Kotek told the crowd how one triumphant moment saw the EyeWriter being hooked up to a projector that displayed whatever Tim was writing on the building opposite his hospital room. He was lying in bed, completely paralyzed, doing virtual graffiti. He sent a message to Not Impossible it was the first time he drew anything in seven years.

Not Impossible already has their sights set on several other projects, including one for the blind community, with the “Chad Cane”. The cane will employ both auditory and sensory signals to alert blind individuals to changes in terrain and upcoming obstacles. Ideally, it will also integrate iPhone/Google Maps functionality to notify the user of their location.

We don’t come across organizations that are truly driving change in this world, and Kotek’s talk at NXNE Interactive was truly inspiring. It’s a completely open and transparent maker community full of people who use technology for the sake of humanity, and we encourage anyone to get in contact with these guys to see how you can help.

Wattpad has released the results of its 2018 Diversity and Inclusion survey, which aims to break down the identities of those within its employee…