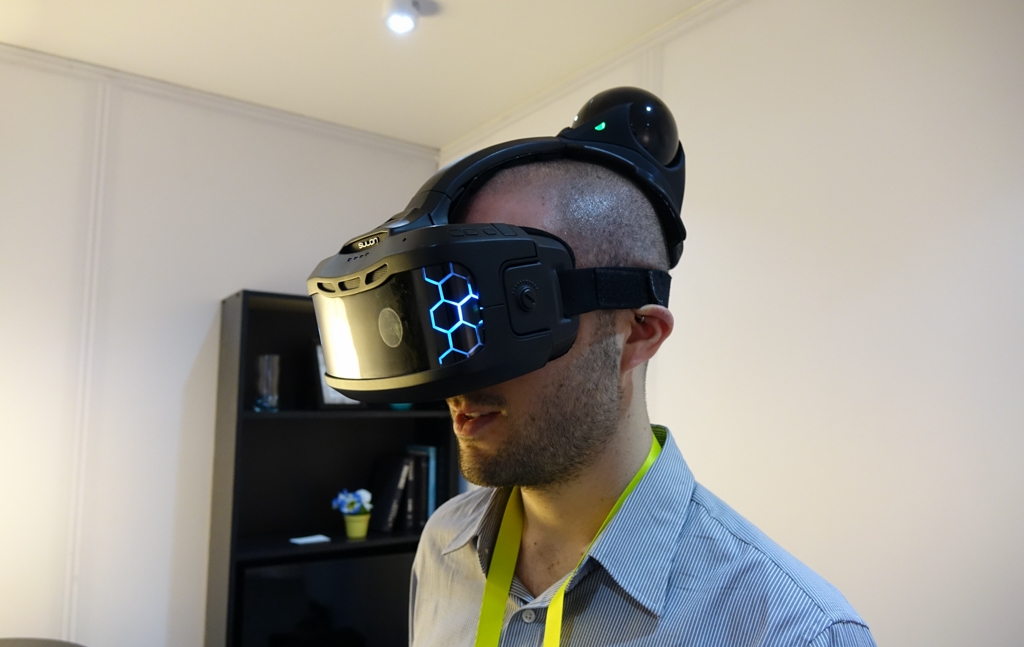 You think, “Another VR headset. We’ve seen this before.” Well, you haven’t seen this, because no one is doing VR like Sulon.

Toronto-based Sulon brought its latest prototype of the Cortex headset to Vegas this year, and the experience was not unlike stepping into a waking dream.

That’s because Cortex not only offers high-definition screens to display virtual reality scenes, a feat on its own if you haven’t yet played with the Oculus Rift or something similar, but Sulon’s magic trick is its ability to sense the physical world around the user and create virtual walls accordingly.

Though the RF interference prevented me from playing the latency-sensitive games, the demo I saw was impressive enough. I was standing in an empty room, with only pot lights shining down from the ceiling. A blue light pulsed from the floor.

In front of me, a V8 engine floated in mid-air, its solidity briefly off-putting. I was told to hold my hands up to chest level, and five white dots appeared above my digits; turning them over the dots turned blue, meaning the cameras located in front of my eyes had locked on to their position.

Now that my hands, and my body, was physically situated in this virtual world, I was able to do things. Amazing things. I raised my hands, and like the user interfaces designers of the 80’s thought would pervade the now, physically separated the engine with a lateral swipe.

Valves, screws and cylinders floated before me, and I could bend down — crawl, even — to see underneath the vestigial pieces of shining chrome. The headset not only tracked my head, but relocated the pieces of the engine in relation to my feet, my hands.

The Cortex is not a new product — Sulon’s CEO, Dhan Balachand, began working on it before he founded the company in 2012. But the latest version, a near-finished prototype that will begin shipping to developers in the fall for $500, is remarkably ambitious. Its spatial awareness is a key differentiator, but there are two others: it has a built-in processing engine, so games and other experiences can be rendered locally; and it supports augmented reality, ascribing context to the real world.

While the headset in its current form is by no means portable, the addition of AR gives the Cortex a much wider breadth of experience than competitors like Oculus (and its Gear VR offshoot). A built-in battery lets it go “off road,” so to speak, and because sensors are constantly monitoring the physical dimensions of a given space, its engine can recreate worlds in real time.

Of course, like Oculus and other VR headsets the Cortex supports HDMI input, so one can expect similar games powered by Havok, Unity and Unreal. Outside of the consumer market, Sulon is working with companies to augment real-world experiences. A rep told me about a pilot project with an unnamed car manufacturer that reproduces a showroom for prospective customers. Users can walk around and, with physical props like chairs, sit inside the vehicles.

I won’t quickly forget the sensation of pulling apart a virtual engine with my hands, nor the rendered lights shining down on me from a real ceiling. Sulon will be releasing more details about its developer program at GDC in March.